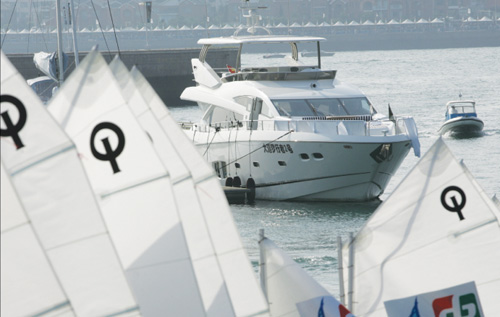 A powerboat parked at the Qingdao Olympic Marina, which is home to more than 300 yachts.
QINGDAO – Chinese yacht owners tend to keep a low profile, not only to conceal their wealth, but also to protect their privacy.

Charles Zhang, CEO of Sohu.com, China’s fourth most-visited Web portal and one of the richest men in the country, declined China Daily’s interview request. He is one of about 150 people who own a yacht in this harbor city in Shandong province.

“A yacht is like a mobile home: You don’t want to invite crowds to visit your home from time to time, right?” said Dong Yongquan, president of the Qingdao International Yacht Club, which operates the Qingdao Olympic Marina after the 2008 Olympic sailing events.

For any yacht harbor, an access control door is a necessity. Here the door leads to the floating dock, where hundreds of yachts are resting. Tanned sailors with blue and white shirts pass by now and then. Once in a while, club members equipped with diving gears jump into the water.

“The celebrities are very concerned about their personal lives,” Dong said, adding that T-shirts and bikinis are an owner’s favorite dress code. Once a stranger or tourist peeks in, vigilant guards will immediately disperse them.

Yachts can obviously sail out to other countries easily. But yacht owners need to go through complicated procedures set by the government before they can depart.

According to China Cruise & Yacht Industry Association (CCYIA), there are about 100 yacht clubs with their own berths. Most of them provide services such as maintenance and sail applications.

“The owners are here mostly in summer where it is cool and comfortable. When it gets colder, they will migrate to the warm south, mostly to Sanya, Hainan province,” said Ma Guanqun, executive manager of the club.

The Qingdao Olympic Marina is home to more than 300 yachts, including several Sunseekers, the top luxury yacht brand in the world, more than 10 imported 12-meter yachts, which is worth 4 million yuan ($ 589,100) each and smaller domestic yachts from nine to 12 meters.

“About half of them belong to companies or local governments, and the other half are private,” Dong said. Among the private owners, most are from coastal areas such as the Yangtze River Delta and the Pearl River Delta, where rich businessmen cluster.

“Here, 60 percent of the yacht owners are from Qingdao, and most of them are in the real estate business,” Ma said.

For company and government customers, a yacht is a novel place to socialize.

“Just imagine talking with your customers on the deck with the breeze blowing and the sun shining – it is so much cooler than a dinner in a restaurant!” said a businessman who was unwilling to give his name.

“Yachts are not like cars: you can buy a parking space in a city, but you can’t find a harbor in a landlocked city,” Dong said, “That’s why many rich men living in inner land cities hesitate to buy yachts.”

Living far from the sea is not the only issue that keeps some of the affluent far from yachts; to many of them, the traditional mindset that only luxury cars and villas are worth buying is another problem.
Dong said that most yacht owners made the decision to buy a yacht after they saw how popular yachts are in Western countries.

It seems like rich men in China are not only competing on larger villas, but also on bigger yachts. Dong recalled that “an important businessman” got very upset when his 24-meter powerboat was dwarfed by a newly arrived 49-meter luxury yacht.

“The member moved his yacht to the other side of the marina and said he was buying a larger one right away,” Dong said.

Li Yuexian, CEO of the Sunbird Yacht, a major yacht manufacturer in China, told China Daily that most of his customers have an asset of at least 10 million yuan.

“To those who earn a six-digit income every year, a yacht is too much to afford; but if they really love it, they can choose to rent,” Li said.

It’s also not cheap to maintain a massive boat.

A regular yacht berth costs 2-3 million yuan to anchor each year and costs much more for large yachts longer than 25 meters.

Moreover, gas consumes a lot of money for large yachts. According to Ma, a 24-meter powerboat needs 80,000 yuan to fill its diesel tank.

Next news: Miss Singapore to be crowned, winner to compete in Miss World 2010 Sanya