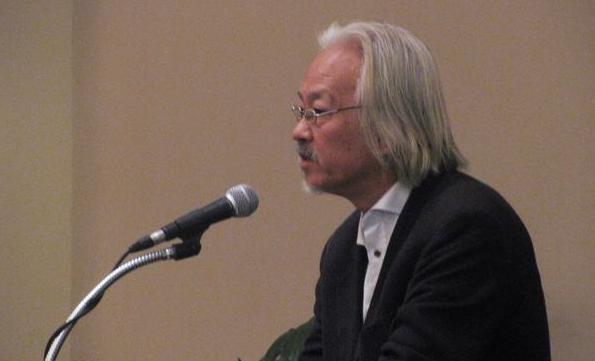 Robert Con Davis-Undiano, professor at the University of Oklahoma, spoke tenderly about a man he considered a friend, both personally and to the university, Friday during the 2010 Neustadt International Prize for Literature banquet.

Walter Neustadt Jr. was a member of the family responsible for the endowment of the international prize for literature. Personally, Walter Neustadt Jr. was credited with much of the expansion of the Neustadt programs for the benefit of students. He died in January. During the honorary banquet, held every two years on the OU campus, Davis-Undiano paid tribute to his contributions.

"He had a long-cherished dream to empower large numbers of students beyond anything the Neustadt programs at OU had done before," Davis-Undiano said as photos of Neustadt were shown on a projector in the room. Neustadt’s wife, Dolores Neustadt, expressed thanks to the university for the tribute.

"I feel like he’s here tonight," she told the crowd.

Author Duo Duo also was honored during the banquet as the recipient of this year’s Neustadt International Prize for Literature.

Duo, whose real name is Li Shizheng, is a Chinese poet who teaches at Hainan University in China. After being presented the award, Duo said he was deeply grateful to be recognized. He spoke of the role of the poet in society and the difficulty of writing in a way that makes an impact.

"In the process what must be spoken meets what cannot be said," he said to the audience.

Duo was nominated by OU professor Mai Mang. In introducing Duo, Mang noted that he had discovered the work of Duo 25 years earlier and had studied his work since, even getting a chance to meet with Duo in 1999 in China. The two became friends. Mang said he considered it destiny to be sitting next to Duo at the banquet.

The Neustadt International Prize for Literature was established in 1969 under a different name, taking on its current name in 1976. The award recognizes poets, novelists and essayists for their contributions to the literary world. It is sponsored by OU and the World Literature Today publication. The award is recognized as an influence to the Nobel Prize for Literature. Since 1970, 27 of the 40 Nobel winners have been candidates or laureates of the Neustadt Prize or have served as jurors for the Neustadt Prize prior to receiving the Nobel, according to a release from World Literature Today. Recipients receive a $50,000 award, a replica of an eagle’s feather cast in silver and an award certificate.

The winner of the 2011 NSK Neustadt Prize for Children’s Literature also was announced at the banquet. Virginia Euwer Wolff, author of "Make Lemonade" and "True Believer," was the recipient.

SOURCE: The Norman Transcript
Editorial Message
This site contains materials from other clearly stated media sources for the purpose of discussion stimulation and content enrichment among our members only.
whatsonxiamen.com does not necessarily endorse their views or the accuracy of their content. For copyright infringement issues please contact editor@whatsonxiamen.com

Next news: Austria’s Stefanie Michl leads in Sanya Ladies Open after 2nd round