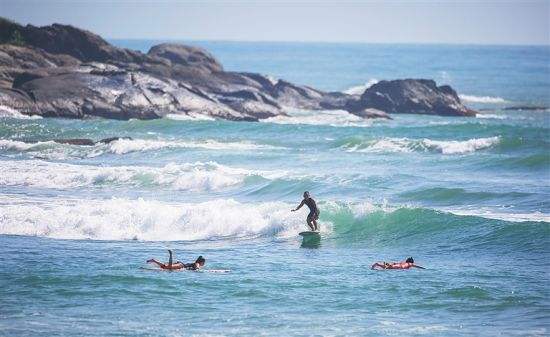 From November 23 to 28, China will host the world’s top surfing countries and its surfers, who will compete in the 2014 Hainan Wanning Riyue Bay International Surfing Festival for the third consecutive year.

As the opening event of the International Surfing Festival from November 23-24, the ISA China Cup will feature the top seven surfing countries based on the results from the 2013 REEF ISA World Surfing Games held in Santa Catalina, Panama, plus the addition of the national Chinese team, who will be competing for the first time in ISA history.

Following the ISA China Cup, from November 25-28, will be the Hainan Classic, Men’s 4-star ASP Qualifying Series event, where the best professional surfers from around the world will compete for a total prize purse of $95,000 USD and valuable points that count towards the ASP Men’s Qualifying Series Ranking.

The ten things you need to know about the Hainan Wanning Riyue Bay International Surfing Festival are:

The invitation-only ISA China Cup features the top seven surfing countries in the world plus the addition of the national Chinese team. Each National Team will include their country’s best four men and two women shortboarders, who will compete for Team and Individual Gold Medals and the honor of representing their nations.

The Hainan Classic will gather a field of up to 96 athletes, including a number of local Chinese surfers.

The ISA has confirmed that a Chinese team will compete in the ISA China Cup for the first time ever in the ISA’s 50-year history, highlighting the growth of Surfing in the country. This is a groundbreaking moment for the development of surfing in China and the ISA’s mission of developing surfing globally.

The other seven invited National Teams are:

Team Australia is the defending two-time winner of the Team Gold Medal at the first two editions of the ISA China Cup in 2013 and 2012.

Past individual champions include Philippa Anderson of Australia, who won the Open Women’s Gold Medal in 2013 and Peru’s Sofia Mulanovich in 2012. In the Open Men’s, Michael Rodriguez from Brazil won Gold in 2013 and Australia’s Heath Joske in 2012.

The ISA’s mission is to develop the sport of surfing around the world. Between the thousands of miles of coastline and over a billion people, the development of surfing in China has great potential. The ISA has partnered with Beijing Womei Advertising, the China National Water Sports Association, the Hainan Culture and Sports Department and the Wanning Sports Bureau, who are all working together for a better surfing future.

More than 200 million people followed the 2013 Hainan Wanning Riyue Bay International Surfing Festival online, in print and on TV. The third edition of the event is set to be another historic moment that will further spread the core values of Surfing to new audiences all over the world.

The ISA China Cup teams will include:

The Hainan Classic will have a maximum of 96 competitors from around the world.

The event is taking place in the world’s most populous country, with over 1.3 billion people and more than 9,000 miles of coastline. Riyue Bay is located on the southeast side of Hainan Island, about 20-30 minutes from the center of Wanning City, China.

Respected surf forecaster Sean Collins, Founder and former President of Surfline.com, was responsible for identifying China’s most consistent and dependable surf spot for a major international surfing competition. After the research that took him over three months to analyze, and included a 10 day visit to China, Collins who has since passed away, recommended Riyue Bay.

Surfline, the official forecaster of the event has predicted small but rideable ENE windswell for the opening days of competition, November 23-24. Small surf is expected to persist going into early next week. Winds and conditions are expected to be most favorable during the morning hours as we head into the weekend.

At this point, the surf looks to be mainly in the 2-3’ (thigh-waist high) zone for the Riyue Bay region over the weekend with bigger sets up to stomach/chest high especially at spots more exposed to ENE swell.

2014 marks the celebration of the ISA’s 50 year anniversary, which has been crowning Men’s and Women’s World Surfing Champions since 1964. The ISA began as an organization created to organize world surfing championships and to crown the world’s best surfers as World Champions.

After 50 years since its inception, the ISA counts with 91 member National Federations. The ISA is recognized by the International Olympic Committee (IOC) as the World’s Governing Authority for Surfing, StandUP Paddle Surfing and Racing and all other wave riding activities.

Next news: Hainan rakes in RMB35.7 billion in tourism revenue in Jan-Oct, 2014