Moreno Hofland claims stage 1 of Tour of Hainan in Chengmai 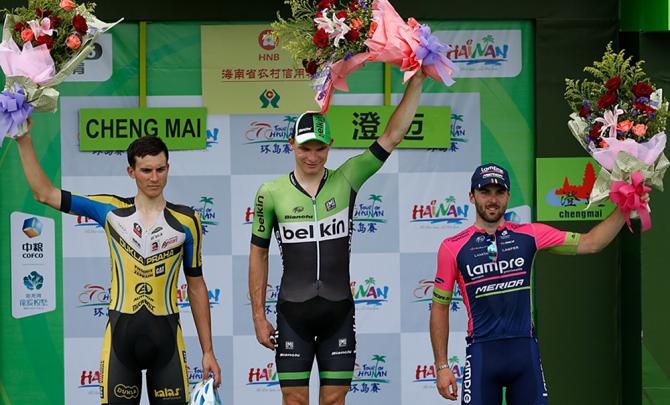 Belkin rider takes race lead
Just like a year ago, Moreno Hofland (Belkin Pro Cycling), claimed stage 1 of the Tour of Hainan in Chengmai. The defending champion handled the pressure of being the hot favorite with a bunch sprint victory ahead of Italy’s Andrea Palini (Lampre-Merida) and Ondrej Rybin (Dukla Praha).

"The biggest difference with last year is that people were looking at me in the bunch all the time”, the Dutchman said at the finish.

"Last year, I didn’t get noticed and we won as a breakaway group but this time, they didn’t let me go. It’s been more difficult to win today. It’s obvious that the level is higher this year with the presence of Astana and Lampre-Merida. It also took us time to bring the CCC Polsat rider [Adrian Kurek] back. As he was away [with 8km to go], so we had to ride the last five kilometers flat out.”

Belkin joined into the action with 5km to go as they had Dennis van Winden in the first attack soon after the start, and the main breakaway of the day didn’t get more of an advantage than one minute after 55 kilometers of racing. Six riders were out in front: Elchin Asadov (Baku), Nicolas Lefrançois (Novo Nordisk), Martin Blaha (Dukla Praha), Dario Hernandez (Burgos BH), Leung Chun Wing (Hong Kong) and Ma Guangtong (Hengxiang).

Chinese teams, mainly locals Hainan HNB-Yindongli Cycling Team, led the peloton to bridge the gap until Frenchman Julien El Farès (La Pomme Marseille) followed Kurek in an attack within 15km to go. Asked if he believed his compatriots chased him down because of jealousy, best Asian rider Ma, who was the all category China Games champion last year at the age of 18 only, diplomatically answered: “I only focused on my team’s tactic and I wanted to grab some time bonus for the blue jersey, which is my goal at the Tour of Hainan. Then I’ll keep working harder for my future.”

The future was also in Palini’s mind as he sprinted for second place behind Hofland. “I’m up for contract and looking for a new team as Lampre-Merida will not keep me for next year,” said the Italian.

"So I want to expose myself a little bit more than I usually do as I’m used to work hard for the team, either in the mountains or in the lead out for sprinters. I’m satisfied with my result today. Hofland will not be the only rider to win stages at this Tour of Hainan. Belkin has a great team here but they aren’t unbeatable. No one is unbeatable in cycling. Even the greatest champions have been beaten. Maybe with a better organization and everyone working towards a unique goal, we’ll beat them. We’ve suffered the jet lag since we arrived from Europe but we’re at the same level as them.”

It’s the first appearance at the Tour of Hainan for Czech continental team Dukla Praha who also made the top three with Ondrej Rybin who is a track specialist of the omnium. “It’s a good start for us at the Tour of Hainan”, said Rybin. “And I hope it’ll only get better and better. Alois Kankovsky is the leader of our team and we’ll work him. It turned out that I could sprint well today. I felt very good. I tried to pass the Belkin riders as I got back on their wheel at the last corner.”

Stage 2 of the Tour of Hainan will be the longest with 207km to cover from Chengmai to Haikou.

Cycling News
Editorial Message
This site contains materials from other clearly stated media sources for the purpose of discussion stimulation and content enrichment among our members only.
whatsonsanya.com does not necessarily endorse their views or the accuracy of their content. For copyright infringement issues please contact editor@whatsonsanya.com

Next news: 200K seniors from northern cities expected to fly to Sanya for warm winter