China has issued an early disaster warning for Fujian, Guangdong, Hainan and Guangxi
Chinese authorities on Wednesday ordered fishermen back to shore and halted rail services as Typhoon Megi, the strongest storm to hit the northwest Pacific since 1990, barrelled towards the mainland.

It is now making its way towards southern China, where it is expected to make landfall in the southern province of Guangdong on Saturday, the National Meteorological Centre said.

"We expect that the strong winds and torrential rain brought by Megi will increase the probability of geological disasters happening in the south such as floods, land and mudslides," the centre warned. 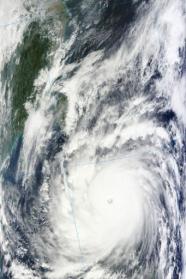 Typhoon Megi is packing winds of 185 kilometres an hour
Fishing boats in the southern province of Guangdong and neighbouring Fujian have been told not to leave port, and those already at sea have been ordered back to shore, the official China Daily newspaper said.

Reservoirs and hydroelectric stations in Guangdong have been put on high alert, and local flood control officials have been told to ensure the safety of venues for the upcoming Asian Games in the provincial capital Guangzhou.

In Hainan, which is still reeling from recent severe flooding, authorities have halted passenger train services, and residents in the island’s capital Haikou have flocked to supermarkets to stock up on goods, state media said.

In Sanya, a resort city in Hainan, billboards were being taken down to remove potential threats to people and vehicles, the China Daily said.

China has issued an early disaster warning for Fujian, Guangdong, Hainan and the coastal Guangxi region, calling on local officials to ensure that people in low-lying areas are evacuated early.

About 140,000 people have already been moved from their homes in Hainan due to the recent torrential rains and flash flooding.

This summer, China was hit by its worst floods in more than a decade, with more than 4,300 people dead or missing — including 1,500 people killed in one devastating mudslide in the northwestern province of Gansu in August.

Megi, which according to the Hong Kong Observatory is currently packing winds of 185 kilometres (115 miles) an hour, is the strongest storm seen worldwide so far this year.

In the Philippines, the typhoon smashed into mostly farming and fishing areas of northern Luzon with gusts of 260 kilometres an hour on Monday.

The three million residents of Isabela province and other areas of the Cagayan Valley farming region were the worst hit.

Isabela governor Faustino Dy said that residents in three coastal towns had suffered massive damage to their homes and were left with limited food supplies after huge waves washed away roads.

"Their food supply is only up to Sunday. But going there is very difficult. There is no road to reach them," Dy told reporters in Cauayan, the closest city to the worst-hit towns.

The first level of a four-step storm alert remained in effect over several provinces in the northern Philippines due to continuing rain.

AFP
Editorial Message
This site contains materials from other clearly stated media sources for the purpose of discussion stimulation and content enrichment among our members only.
whatsonsanya.com does not necessarily endorse their views or the accuracy of their content. For copyright infringement issues please contact editor@whatsonsanya.com