2010 Tour of Hainan concludes in Sanya, long way to go for Chinese riders 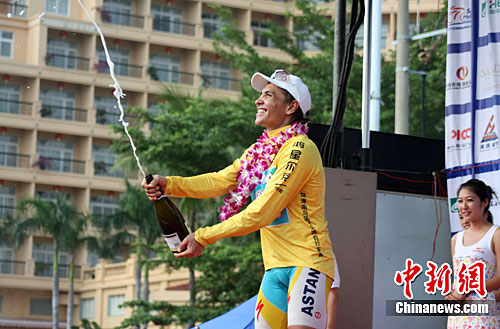 Out of the 127 participants of 20 cycling teams, there are 13 Chinese riders, ten of whom representing China’s Qinghai Tianyoude and Max Succesuss cycling team and three other playing for the Netherlands’ Shil-Shimano. The Marco Polo team registers in China but has none of their cyclists or team officials a Chinese.

Both of the pure Chinese team, Qinghai Tianyoude and the Max Success continental cycling team, have finished close to the bottem, only beating Iran’s Tabriz Petrochemical, who received a five minutes punishment after being late to miss the first day competition, and Denmark’s Glud & Marstrand-LRO.

"There’s no excuse. We can’t say that the absence of the Chinese national team led to the embarrassment," said Xu Gang of the Max Success, who’ll represent China in next month’s Asian Games.

"It’s true that our road cyclists are far behind the world’s leaders," echoed team manager Shen Wei of the Max Success.

"We know our positions and just want to have our riders more experienced through the Tour of Hainan. In a sense, we can say that our riders have been tested and better prepared for the Asiad via competing here," he added.

In Shen’s opinion, the Chinese riders are less competitive in sprint and lack of team work during race. "Watching what the foreign teams and riders did for victory and how they made it, we’ve learnt a lot," he said.

The most important thing the Chinese cycling has learnt is that a good rider grows through races.

"Competition is the best training," said Chen Zhenhong, general secretary of Hong Kong bicycle union. "China’s riders were not born less competitive. They just need more experiences on world stage and more chances to improve and to prove themselves."

The international commissaire made an example of the Australian and Kazakhstan cycling, saying both the two have grown into world powerhouses in the last decade by training their riders abroad and sending them to the European top flight events.

"Nearly all the world’s leading riders go to the interntional tours twice or three times a month during the European season, other than our Chinese cyclists just stay home to train in less intense format. That makes the difference," said another Chinese rider Wei Yuan, who represents the Tianyoude team.

Alexander Donike, Chief Commissaire of the Tour of Hainan, agreed with Chen and said: "China has a handful of riders with big potiential. What they need are enough chances of riding against the best to make themselves better."