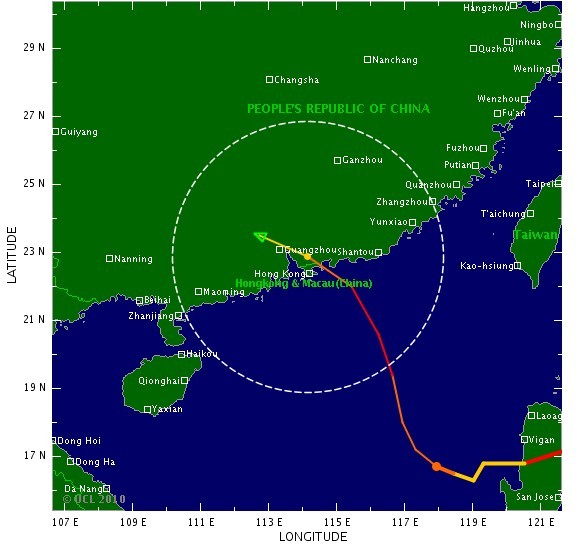 Typhoon MEGI: Storm-centered zoom at 96 hours lead
South China provinces are bracing themselves for typhoon Megi as the strongest tropical storm of the year inches toward coastal regions.

The typhoon is expected to make landfall in the central or western coast of Guangdong Province around Saturday, the provincial meteorological center said in a statement Tuesday.

It was located 900 kilometers southeast of Dianbai county in Maoming city in Guangdong at 6 p.m., according to the latest report from the National Meteorological Center.

Packing winds of 52 meters per second near its center, the typhoon is heading northwest at a speed of 10 to 15 kilometers per hour.

The typhoon is expected to bring torrential rains to Guangdong over the next few days, the provincial meteorological center said.

The State Oceanic Administration estimated that the coast near Guangdong could see 5- to 7-meter high waves over the next 48 to 72 hours.

The provincial flood control and drought relief headquarters have also been called upon to take precautions and ensure the safety of venues and equipment of the upcoming Asian Games in Guangzhou, the provincial capital of Guangdong.

Authorities have ordered all fishing boats to return to harbor before midnight Tuesday and reservoirs and hydro-stations to be on alert.

Residents in Haikou, capital of southernmost island province of Hainan, are swarming to supermarkets to buy food, vegetables and bottled water as the typhoon approaches.

By Tuesday afternoon, the Office of State Flood Control and Drought Relief Headquarters had raised the emergency response to its second-highest level.

Megi brought heavy rains — expected to reach 1,000 millimeters — to Taiwan’s Ilan and Hualien Monday. Total losses are not yet known.

The typhoon left four dead and six injured in the Philippines and also destroyed tonnes of crops.

The Ministry of Civil Affairs and the State Disaster Relief Commission issued urgent notices Monday to the civil affairs departments in regions along China’s southern coast –Hainan, Guangdong, Guangxi and Fujian — ordering them to prepare for rescue and relief operations.