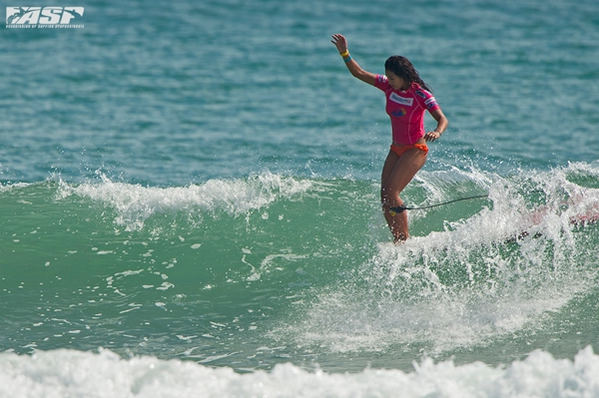 Wanning Mayor Zhang Mei Wen is proud to once again showcase the culture, surf and sights that his community has to offer, and is looking forward to again welcoming the world’s best longboarders to his hometown for the 2013 Swatch Girls Pro China hosted by Wanning.

"The city of Wanning is really proud to again be hosting 2013 SWATCH GIRLS PRO CHINA and the Riyue Bay ASP Men’s World Longboard Championship, namely the fourth Wanning International Surfing Festival, Hainan, China," said Wanning Mayor Zhang Mei Wen. "On behalf of the Wanning People’s Government and Wanning’s People, I would like to thank the ASP, sponsors and media for supporting for the development of surfing industry in Wanning!"

"It’s exciting looking back on last year’s win," Moniz said. "It doesn’t feel like it’s been almost a year! Thinking about China again makes me real fired up to go back and do it all over again! Hopefully this year with a bit more surf. China, or Hainan to be specific is a really special place. The culture there runs so deep and is still so raw and real. It’s beautiful for me to see all the people, the fishing villages, the farming, all that gives me a little taste of what Hawaii was probably like once upon a time. It makes me appreciate everything God has blessed me with. It’s also great to experience all the love from every volunteer who helps out at the event site. They are the ones who make our experience unforgettable!"

Kassia Meador (USA) is world renowned for her free-surfing and style, but these skills also make her a threat in competition as she’s always in the mix for the ASP Women’s World Longboard Title and will once again be one of the favourites at this year’s Swatch Girls Pro China hosted by Wanning.

"It’s great to have a chance to surf with some of the best female longboarders in the world," Meador said. "I think one of the things I like most about going to China to surf is it’s a place I never thought surfing would take me, and every time we go it’s a beautiful experience. For women’s longboarding the Swatch Girls Pro China is the premier global event. Swatch really goes above and beyond to take care of us, and make sure we have the best surf conditions to compete in. Not to mention it’s just super fun to be there with everyone in China. I can wait for this year’s event."

Chelsea Williams (AUS) has proven to be one of the form surfers over the past two year’s at the Swatch Girls Pro China hosted by Wanning, winning the inaugural event in 2011 and finishing runner-up to Moniz last year. Coming close to winning the ASP World Longboard Title on multiple occasions continues to spur Williams on to keep fighting for the sport’s highest honour.

"Coming so close to winning the ASP World Longboard Title so many times proves that I have what it takes to win," Williams said. "This year I will be putting 110 percent into it. I still feel like an underdog at times which I think motivates me more and throws more fuel on the fire. Swatch really looks after us at this event. It’s a professional event and you are made to feel like a top rated athlete while you’re there. It’s a great contest and one I always look forward to going to. The set up is great and when there are waves there’s no better place to be competing and spectating."

Darci Liu (CHN) is at the forefront of the growing surf culture on Hainan, taking to the water to surf or teach others as often as possible and has been awarded a wildcard into the Swatch Girls Pro China hosted by Wanning for the third straight year.

"In two years I’ve seen surfing grow tremendously and appreciate what the Wanning Government and Swatch are doing to promote and encourage Chinese to learn more about surfing," said Darci. "I’m really looking forward to having Swatch and the friends I’ve made at the event return this year to join us all in Wanning for the Swatch Girls Pro China."

SOURCE: News International
Editorial Message
This site contains materials from other clearly stated media sources for the purpose of discussion stimulation and content enrichment among our members only.
whatsonsanya.com does not necessarily endorse their views or the accuracy of their content. For copyright infringement issues please contact editor@whatsonsanya.com

Next news: Sanya’s Phoenix Town to be built into an ecological livable town