Updated: 2013-09-24 00:00:00
A bride was so desperate to look good in her wedding photos that she shed seven stone over the course of her engagement.
Former snack addict Sam McGinlay, 28, swapped bacon rolls and crisps for fruit and veg and began a gruelling exercise regime of cycling and high-intensity workouts after her partner Brian McGinlay proposed.
In just 11 months, Mrs McGinlay shrunk so much that she had to alter her £750 wedding dress to bring it in from a size 20 to a size 12. 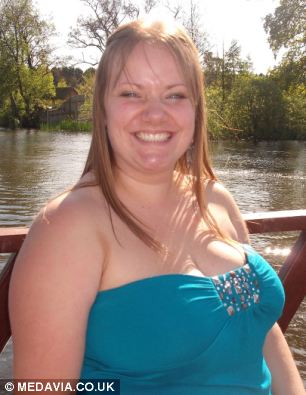 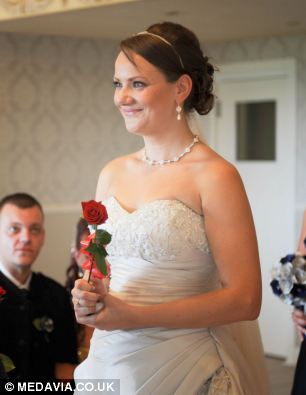 Sam McGinlay, 28, married Brian McGinlay, 31, last month after losing seven stone in a 11 months. She was a size 20 at the time of her engagement (left) and dropped to a size 12 by the time she got married (right).
She said: ‘Shortly after Brian proposed I went to a dressmaker to try on dresses with my mum, Barbara.
‘I tried to pretend I was happy squeezing into a size 20 dress, but the truth is I was heartbroken. I never imagined I would be a fat bride.
‘I had really horrible thoughts of me looking like a whale as I waddled down the aisle.
‘So I went from eating around 3,500 calories a day to a much more balanced diet which helped me to exercise regularly.’ 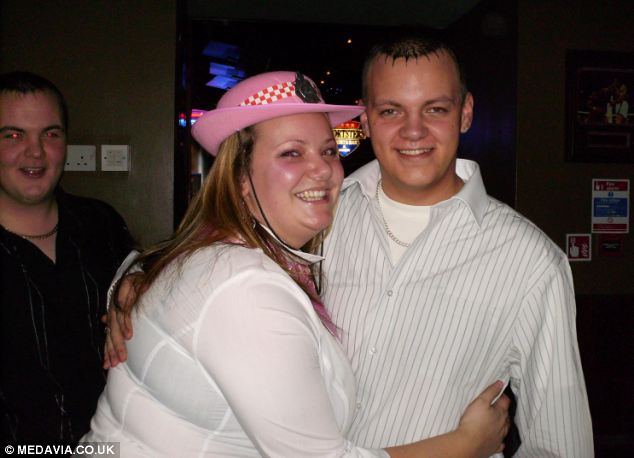 Sam McGinlay and Brian McGinlay pictured shortly after they got together in 2005. ‘I was convinced we looked weird together because Brian was so slim,’ said Mrs McGinlay.
Mrs McGinlay took on a largely sedentary office job when she was 17 and, after a year of desk snacks and little exercise, her weight had increased from her natural 11 stone to 15 stone.
Mrs McGinlay struggled to control her eating impulses over the next decade.
‘Crisps were one of my weaknesses. I ate packets and packets, but told myself I wasn’t doing myself any harm.
‘I remember at age 18, weighing myself before a big night out with my best friend, and the scales tipped 17 stone. It was so embarrassing.
‘I was bored and self-conscious and in need of cheering up, and that just made me crave fatty, sugary foods even more.’ 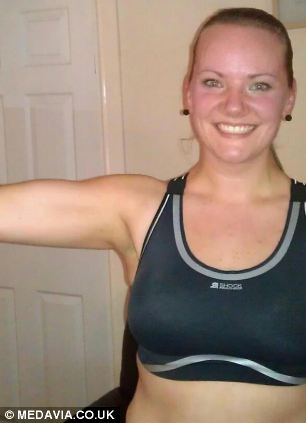 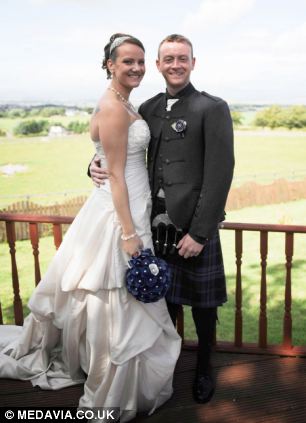 Mrs McGinlay underwent a gruelling exercise regime to fit into her size 12 dress for her wedding day.

She met Brian McGinlay, 31, through friends in the year 2000 and they began dating in 2005.
Mr McGinlay said: ‘I didn’t care what size Sam was, it was her personality I was attracted to. ‘But I could see she was unhappy. There were times I could not bear to see her so upset.’
Mrs McGinlay, who works at an accountancy firm, said: ‘I was 18 stone and convinced we looked weird together because Brian was so slim.
‘I looked awful in holiday photographs. I was ashamed to look so overweight compared to my friends.’
The birth of the couple’s son, Aiden, in December 2009, pushed Mrs McGinlay’s dieting plans down her list of priorities.
‘I told myself that breastfeeding meant I could not diet. Aiden came first, and that was that.
‘I’d lost a small amount of weight a year before giving birth, but around the time of our five-year anniversary, when Aiden was three months old, I was back to size 20.’ 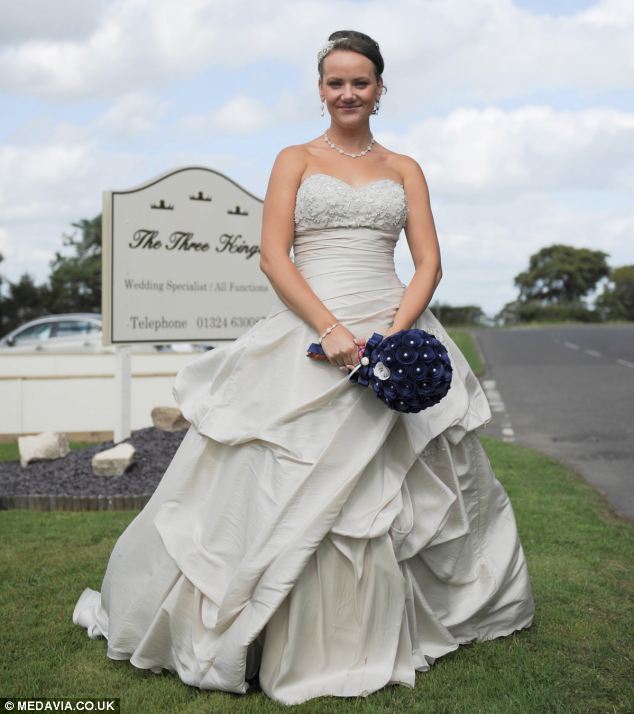 Mr McGinlay proposed with a white gold ring set with a cluster of diamonds, and Mrs McGinlay knew it was time to take action.
She said: ‘I had tried losing weight before, but now I was truly determined. I knew I needed the support of other people, so I joined exercise classes and slimming groups.
‘I began to enjoy high-intensity exercise like Metafit cross-training which involves springs, lunges, squats and plank holds, and Zumba.
‘I spent at least two and half hours a week on my bike, and went for frequent 10 kilometer hill walks.’
Before her weightloss revelation, Mrs McGinlay would tuck into a bacon roll and creamy coffee for breakfast, followed by a cheese and mayonnaise sandwich for lunch and, for dinner, huge portions of hearty meals like meat with patties and bread and butter. Snacks would include thick crisps and sweets.
The new Mrs McGinlay enjoyed a cup of tea with rich tea biscuits and a banana for breakfast, a wafer-thin ham and light cream cheese sandwich on wholemeal bread with a yogurt for lunch and portion-controlled reduced-fat curry for dinner, with grapes for a snack.
Forklift driver Mr McGinlay also went on a reduced calorie diet in support and lost two stone.
He said: “Sometimes Sam would be upset because she would attend slimming class and would not have lost any weight.
‘But I helped her by reminding her she was converting fat into muscle.
‘She was much happier and it was wonderful to see.’
Mrs McGinlay said: ‘It was tough going but my Zumba teacher, Carol, was amazed by my progress. She called me the "ever-shrinking woman".’
Eventually, Mrs McGinlay began seeing the fruits of her labour.
By Christmas 2012 she had shrunk to a size 14 and by April she had reached her 11 stone target – a weight loss of seven stone.
Mrs McGinlay and Mr McGinlay married on August 3rd at the Three Kings function centre near Falkirk, followed by a honeymoon to the Trossachs in Scotland.
‘It was amazing to dance with Brian at the reception without getting out of breath,’ said Mrs McGinlay.
‘I was so proud when I was able to pack a size 12 bikini into my holiday packing.
‘I don’t even recognise the person in the old photographs.’
SOURCE: Daily Mail
Editorial Message
This site contains materials from other clearly stated media sources for the purpose of discussion stimulation and content enrichment among our members only.
whatsonsanya.com does not necessarily endorse their views or the accuracy of their content. For copyright infringement issues please contact editor@whatsonsanya.com

Next news: Ferry service between West Islet and Sanya Port resumes on Sep 19