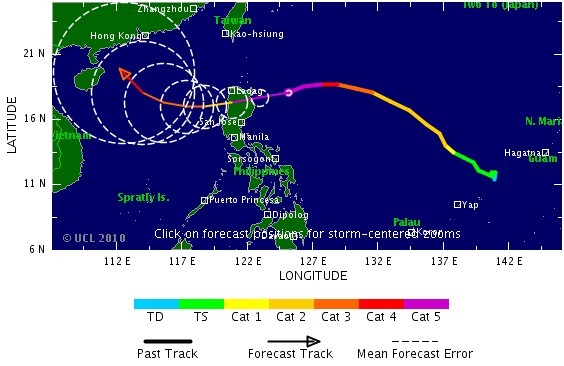 Typhoon Megi, which means "catfish" in Korean, is heading for Northern Luzon at a speed of 20 kilometers per hour after it turned into a super typhoon early Sunday. It is expected to enter the South China Sea on Monday, said the NMC.

With winds near the center reaching more than 56 meters per second, the super typhoon could cause wild winds and huge waves in the South China Sea in the next three days, it said.

The NMC issued an orange alert, the second-highest-level alert, for strong winds at 10 a.m, warning vessels to take shelter in ports and urging local authorities to prepare for emergencies in the upcoming strong winds and rain storms.

SOURCE: english.sina.com
Editorial Message
This site contains materials from other clearly stated media sources for the purpose of discussion stimulation and content enrichment among our members only.
whatsonsanya.com does not necessarily endorse their views or the accuracy of their content. For copyright infringement issues please contact editor@whatsonsanya.com

Previous news: Over 100,000 evacuated as new round of rainstorms batter Hainan