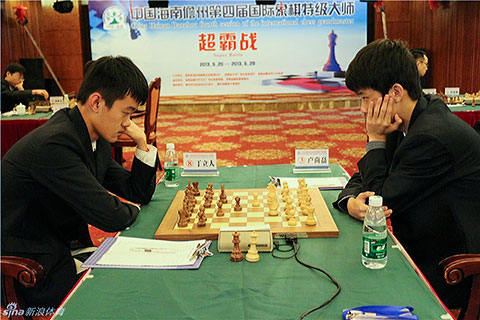 China’s top player Wang Hao is now resting after having just finished the super tournament in Norway. The former Women World Champion Hou Yifan, who played in the past three years, is also not participating, turning the tournament into a pure men’s tournament for the first time. GM Wang Yue is also missing for personal reasons.

The time control for this tournament is 90 minutes for 40 moves plus 30 minutes for the rest of the game with an increment of 30 seconds per move, starting from move one. Draw offers are not allowed before move 30.

The opening ceremony, held in the banquet hall of HNA New World Hotel Danzhou, was attended by Mr. Yang Junan, Chairman of the Chinese Chess Federation, Mr. Ye Jiangchuan, the General Secretary of the Chinese Chess Federation, Mr. Lin Dong, Mayor of Danzhou city, as well as dozens of guests and journalists and hundreds of students from the local primary schools and middle schools.

Next news: 2013 China Dragon Boat Tournament to kick off on June 8th in Chengmai