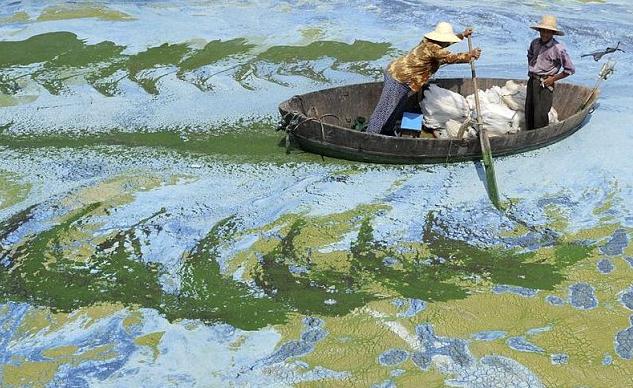 Contaminated: Anger is growing about pollution in China’s lakes, wells and rivers. Pictured are fishermen rowing a boat in the algae-filled Chaohu Lake in Hefei, Anhui province. 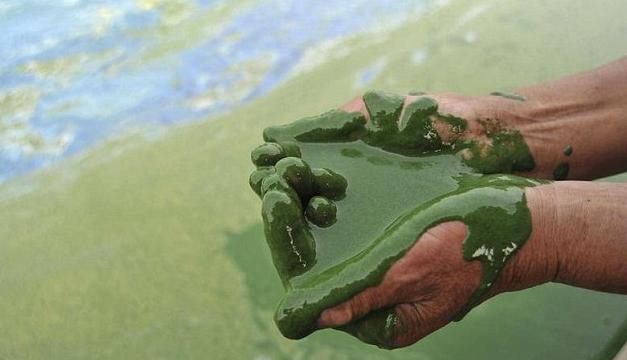 A fisherman fills his cupped palms with water from the algae-filled Chaohu Lake. In some places the levels of contamination have led to a spike in cancers and other diseases
The Chinese government has promised to tackle ‘cancer villages’ – areas where pollution is so bad it has lead to a huge rise in diseases like stomach cancer – after a huge social media backlash from both ordinary Chinese people and global campaigners.

There has been an explosion of outrage about cancer villages on China’s social media sites and blogs, which are used by increasingly powerful activists to raise awareness.

Huangjiawa, a village in Shandong province, became a symbol of the growing environmental movement after it emerged that the area has one of the highest rates of stomach cancer in the world, news of which spread rapidly across Weibo, a Chinese social media site similar to Twitter.

The wells in the village are believed to be contaminated with toxins from a nearby aluminium smelter, which also pumps pollution into the sky.

A villager, who only identified himself as Mr Zhang, told the Financial Times: ‘Ten years ago the water in our rivers was so clean, even cleaner than the piped water is today.’

The village’s plight caught the attention of activist Deng Fei, who has three million followers on Weibo, making it hard for the authorities to ignore his accusations that smelter bosses deliberately pump waste water underground.

In 2009 Deng Fei said: ‘If things continue like this, we will all be doomed. If the issue [of ground water pollution] is not properly solved, not only will it kill people but it will also drag down the entire healthcare system because of the number of cancer patients it causes.’

Last month authorities were forced to acknowledge the existence of cancer villages, A report from the environment ministry said that the widespread production and consumption of harmful chemicals forbidden in many developed nations are still found in China.

‘The toxic chemicals have caused many environmental emergencies linked to water and air pollution,’ it said. ‘There are even some serious cases of health and social problems like the emergence of cancer villages in individual regions.’

Other cancer village cases have also hit the public consciousness, such as that of Chen Zuqian, a Chinese farmer who last month dared a local environment official to swim in his province’s polluted rivers and was been badly beaten. His family say the attack was punishment for speaking out. 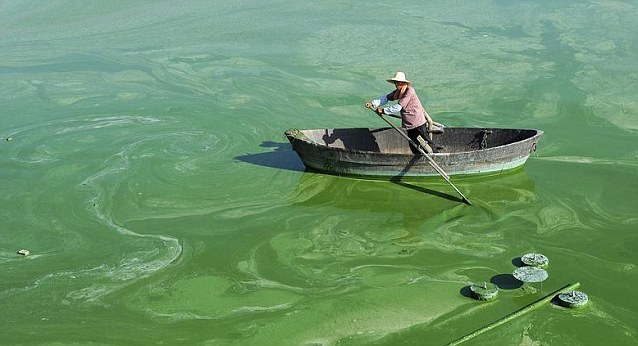 A worker rows a boat in Chaohu Lakw. Farmers are forced to use contaminated water on their crops
Chen, from the township of Banqiao in Zhejiang province, was among a number of local businessmen who offered the region’s top government official £21,000 to take the plunge.

The official was then interviewed on TV and was derided for promising to swim in the river in ‘three to five years’.

In 2009 Greenpeace campaigner Mariah Zhao gave a first-hand account of a visit to a family living in a cancer village in China’s Jiangsu province.

She said: ‘When I first saw him I was in complete shock. Farmer ‘Wang’ lay on the bed, his ribs corrugating his hollow chest. His stomach was cut by a ragged stark scar from recent surgery.

‘He had intestinal cancer – one of many cancer victims in his village. Farmer Wang’s cancer, say his family, was caused by water pollution from the army of chemical plants which surround their village and farmland.

‘The water in Farmer Wang’s family well pumps up is black and putrid and topped by a poisonous froth.’

Farmers in China have no choice but to use polluted water on their crops. In the town Ms Zhao visited, grocery shops advertise rice shipped in from other places as ‘clean water rice’.

‘Groundwater pollution has already entered a state of extreme crisis.’

With a population of 154, the village had its first cancer victim in 1974. By 2001, 36 villagers had died of cancer and 22 had died of heart and brain diseases. Only four of the 30 families had not had a cancer victim, while cancer killed four entire families.

Nearby fertilizer and steel factories were regarded as the cause and cancer-causing metals, several times exceeding the safety limit, were found in the villagers’ hair, buildings, fields, and crops

He added that Tianjin government records showed that cancer rates were 1.3 and 2.1 per cent in a pair of cancer villages called Xiditou and Liukuaizhuang respectively. This is significantly higher than the national average of 0.07 per cent

Anger over the pollution has spread across the world. Al-Jazeera journalist Lisa Fletcher tweeted: ‘Soil pollution is a state secret in #China. Imagine how bad it must be, given that China admits to #cancer villages.’

The ruling Communist Party promised its people today that it will spend cash solve the country’s serious air, soil and water pollution problems which blights the lives of many poor Chinese people.

Retiring Premier Wen Jiabao, speaking at the National Congress, said: ‘In response to people’s expectations of having a good living environment, we should greatly strengthen ecological improvement and environmental protection,’

‘The state of the ecological environment affects the level of the people’s well-being and also posterity and the future of our nation.’

Fresh drinking water makes up only six per cent of the total water on Earth, but all of the world’s population relies on it.

Millions of people in the developing world rely heavily on groundwater, mostly through shallow dug wells. These can easily become polluted by chemical waste dumped by industry and mining concerns, as well as pesticides used in agriculture and biological waste from rubbish dumps.

As well as directly affecting people who drink the water, the chemicals contaminate the soil and enter the food chain.

Accumulation of heavy metals and some organic pollutants can lead to cancer, reproductive abnormalities and other more severe health effects.

Next news: Hainan to focus on development of mid-grade hotels