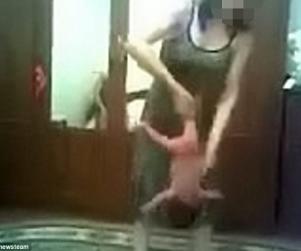 An online video posted to Facebook has horrified thousands of people worldwide over the past few days.

The video, called “Real baby swung around by mum,” shows a Russian woman violently swinging and flipping her naked baby boy around — by just a leg or an arm at times — while the boy becomes redder and audibly more upset. The “child yoga” fad, which has been condemned as encouraging child abuse, is believed by many to make the child stronger and bigger by increasing blood flow to the baby’s joints.

Just as horrific: in the video, the woman is heard calling the boy a “little idiot” while she smiles and asks him, “Why are you crying?”

"He wants me to do it. He wants it. The little idiot. He likes it like this,” the woman says, according to the Daily Mail.

The clip is a little blurry so it is difficult to confirm if the baby is in fact real or if the video is a stunt, but extreme child yoga is known to be a common practice in eastern Russia, which is where this supposedly came from.

The video has attracted tens of thousands of negative comments and backlash against it, as many of the comments express disgust and have called for Facebook to take down the video.

"Only managed to watch a couple of seconds of this sick video! All the people involved in this need to be strung up!!” one comment read.

"Can’t believe what I just witnessed, sick to the bottom of my stomach,” wrote another.

A Russian baby yoga instructor Lena Fokina told reporters last year that the practice helps children’s muscular abilities and that it is not inhumane, according to Daily Mail.

"The method was originally developed to cure and correct the health of children having muscular or skeletal problems but it is also suitable for healthy children … And the children often turn out to be early readers, singers, talkers, swimmers. It also makes their hands stronger. We are humanists and we don’t do anything wrong,” Fokina said.

SOURCE: opposingviews.com
Editorial Message
This site contains materials from other clearly stated media sources for the purpose of discussion stimulation and content enrichment among our members only.
whatsonsanya.com does not necessarily endorse their views or the accuracy of their content. For copyright infringement issues please contact editor@whatsonsanya.com