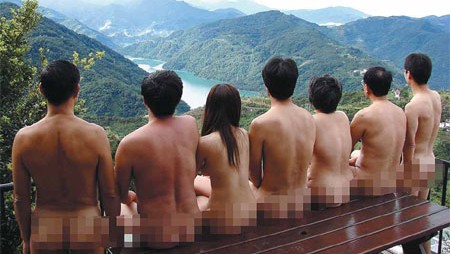 A group of naturists admire the view from a hilltop on the outskirts of Beijing. Photos Provided to China Daily

For Chinese naturists, finding a public space that is naturally secluded is always a challenge.
China’s naturists often fantasize about baring it all in the sun and the wind, but secluded and safe places are hard to find and public acceptance is equally lacking. Raymond Zhou takes a closer look at the bare facts.

Autumn offers the best weather for Beijing. In 2009, a group of six people took advantage of the golden autumn days and drove 120 kilometers to a far suburb of the capital city in search of a place where they cannot be seen.

They were naturists, who go with the intention of strolling about in their birthday suits in the embrace of Mother Nature.

One of them had discovered a mountain in Huairou, to the northeast of central Beijing. There were no tourists, and they picked a trail with no traces of other humans. After climbing up for half an hour, they came to a giant flat rock. It seemed ideal for sunbathing au naturel.

Before they could totally relax, however, they were visited by a large swarm of wasps. The insects seemed especially attracted to the two female members of the group. While fending off the winged invaders, the naturists found to their dismay that they themselves had trespassed. There were two hornets’ nests beneath the rock.

As they left the place and trekked deeper into the mountain, they stumbled onto more wildlife – a swarm of butterflies and a lone snake. Finally, they settled on a spot under a chestnut tree. Using twigs as a temporary fence so that insects would climb up rather than sneak in, the group put towels on the trodden grass and started taking off their clothes.

The best thing about this spot was, they could see people coming up, but not vice versa. The worst thing: It was too cramped for comfort.

This episode is typical of the dilemma faced by China’s growing numbers of naturists.

In a country with more than 1.3 billion people, it is not easy to find a public space that is naturally secluded. Wherever you go, you are likely to run into someone who is not ready to accept social nudity, or worse, who is prone to interpret such acts as hooliganism, a vague term in China that may encompass anything from sexual harassment to graffiti.

According to Fang Gang, an expert on sex and gender issues, it is impossible to estimate the number of naturists in China, but he speculates the potential is massive.

"Anyone who went skinny-dipping while on an overseas excursion is basically a naturist," he says. Likewise, nobody knows how many naturist groups China has because none has been officially registered.

In online forums, there are many groups with a proclaimed interest in naturism. But Fang explains that most of them only talk about it. Nothing will come out of it, he says.

A few would organize meetings, not the clothing optional type, but fully dressed, for more talks about the possibility of arranging something. Out of those, a very small fraction may truly do something like the autumn getaway described above.

Fang Gang, whose recent book on naturism is the first in the country to tackle the phenomenon, argues that existing Chinese laws do not make this kind of public nudity illegal.

The most frequently cited law says: Anyone who molests others or intentionally exposes oneself in a public place and causes bad consequences will be subject to detention of more than five days but less than 10 days.

Fang interprets it as a law which targets exhibitionists who expose their private parts to harass another person.

"Naturists care only about their own state of dressing and do not intend to target any outsiders. They do not have an object for violation," he says.

As a matter of fact, China’s naturists go out of their way to avoid what they call the "textile public". That is why it is so troublesome for them to find a natural enclave where they can rest or play sports stark naked.

Usually when a naturist bumps into a non-naturist in the wilderness, he will cover himself with his backpack and let the other person pass. The clothed person, who might be startled, ideally understands what’s been encountered and moves on.

It only becomes a problem when the police or media get alerted, says Fang. The cops may come and drive away the naturists if it is a regular hangout; or the media may report on it, eliciting derision and outcries from the public.

"But after the police and the media are gone, the naturists will come back. Local authorities turn a blind eye," he says. "The nude beach in Sanya was shut down in 2008 when it made headlines, but there’s a lot of clothing-free activities there now."

He also visited the famous nudist park on Harbin’s Sun Island. It turned out to be a very isolated patch inside the mammoth park that takes great effort to locate.

Fang says, to his knowledge, no one in China has ever been punished for naturist activities.

"The most the police would do is to banish a naturist from a public premise."

There have been several reported incidents involving artists, who use streaking or other forms of nudism for artistic creation, but these were officially banned. The online public tends to label them "strange", "crazy" or "perverse".

The biggest misconception about naturism, insists Fang Gang, who has written some 50 books on sexology, is sex.

While the public predominantly sees naturism as a precursor to sex, naturists contend that pure naturism is anything but sex.

Fang Gang argues that nude is a natural state. Except for the most physically attractive among us, he says, clothing enhances sexual appeal while total nudity would do the opposite.

Those who want to use social nudism for sexcapades are in for a rude awakening.

A Beijing naturist with the nickname Piggy has participated in a few clothing-optional outings. He says the kind of group atmosphere is not inductive to sexual fantasy.

"Everyone knows where the line is, and nobody wants to cross it. People may tell a few dirty jokes, but that’s not different from a regular group trip."

However, in online bulletin boards, one of the most frequent questions that pop up is about sexual arousal: "What if I have an erection in front of others, especially females?"

Naturists interviewed for Fang’s book claim this is extremely rare. Most have never encountered it. For those few who have witnessed it, they say it’s usually handled by temporarily covering oneself with a towel.

"It quickly goes away," they add.

Naturist forums strictly ban the posting of photos of a sexual nature. In a nudist colony, one is not supposed to leer at another person or say anything provocative.

No sexual activities are allowed in public, not even between couples. Some groups even prohibit dancing or alcohol drinking for fear that they may lead to fondling.

Many approach naturist groups with sexual curiosity. For example, many men would inquire about female members in a group. They would back away once they find out no female has signed up for a group gathering.

On the other hand, the appearance of a pretty young woman would invariably attract a lot of attention.

A 24-year-old Beijing woman named Xiu-xiu went to a group spa, her first nudist event, and disrobed while eating. Some men noticed this and joked that she was "burning with sexual desire".

"Nothing is pure," she says afterwards. "It is human nature. But why can men walk around bare-chested and women cannot?"

Among those who lean toward nudism but balk at taking it all off are people uncomfortable with their own bodies. "I’d do it if I’m physically fit," some would say.

In a larger picture, Chinese society, unlike the ancient Greeks, does not celebrate the human body. While some can accept the aesthetic beauty of the supermodel type in artistically tasteful arrangements, most tend to treat a regular nude as an ugly sight, something to be covered up.

There is essentially no tradition in China of enjoying the nude for what it is – other than a sexual object.

There are occasions where public nudity is accepted, such as in public bathhouse where people of the same gender shower or bathe together without any awkwardness. But with widespread indoor plumbing and private bathrooms, this, too, is dying out.

"Most people believe nudism has to be associated with sex," says Fang Gang. "Deep down, we still adopt an attitude of mystery and sexual objectification toward nudism. And beyond that, we tend to paint sex in a negative light."

Li Yinhe, another renowned sexologist, says that Chinese culture has always been conservative toward nudity with the possible exception of the Tang Dynasty (AD 618-907) with its sexually suggestive fashion and dance moves.

"Whether you regard the human body as beautiful or ugly, it should not be used as a moral guide for nudism.

The bottom line is whether such an activity infringes on others. If nudism does not hurt others, it is not immoral.

Even if 99 percent of the population may not like it, they should still respect the choice of the 1 percent," Li says.

Meanwhile, many Chinese naturists admit they are made to "feel like thieves", either in private homes or stripping just long enough in nature to take a photo or two.

All they want, says Fang Gang, is a natural environment that is relatively private, maybe an uninhabited island.