8 surfers to compete at finals of 2012 ShenZhou Peninsula Pro 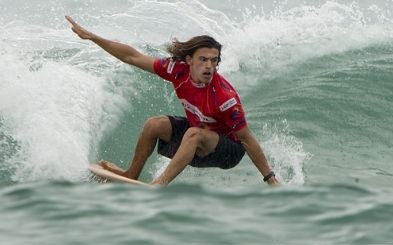 Edouard Delpero (FRA) eliminated his brother Antoine Delpero (FRA) to advance to the Quarterfinals of the CITIC PACIFIC ShenZhou Peninsula Pro today. Pic ASP/Robertson
The 2012 CITIC PACIFIC ShenZhou Peninsula Pro hosted by Wanning put on another massive day of longboarding action at Riyuewan today, with fun 2 – 3 foot (1 – 1.5 meter) waves on offer. The field of 34 surfer has been whittled down to just eight Quarterfinalists, and tomorrow one of them will be crowned the 2012 ASP World Longboard Champion.
Nelson III Ahina (HAW) moved through the early Rounds of the CITIC PACIFIC ShenZhou Peninsula Pro under the radar, but an impressive Round 4 win over Harley Ingleby (AUS) and Justin Bing (ZAF) sees him advance to the Quarterfinals as a threat. Ahina, the tall, stylish humble Hawaiian will face Ingleby in Quarterfinal 1 when competition resumes.
"I didn’t think I’d do this good," Ahina said. "The first time I did an ASP World Longboard Title event I couldn’t get out of the first round, so this is a big accomplishment for me, it’s awesome. I finally believe in myself that I can make it and it feels good. I could go home happy now because I already feel like a World Champion."

Edouard Delpero (FRA) eliminated his brother Antoine Delpero (FRA) in Round 5 to advance to the Quarterfinals in a very tight battle. The pair went wave for wave and the lead changed multiple times, but it was younger brother Edouard who emerged victorious.

"We have had heats together before but never in an ASP WLT event," Edouard Delpero said. "It’s good for me because I won. It’s a contest so it’s difficult that one of us had to lose, we just tried to take some pleasure in it and have fun. I’m not trying to think about the ASP World Longboard Title I have to focus on my next heat. I fell a few times earlier today so I need to fix that before tomorrow."

Harley Ingleby (AUS), 2009 ASP World Longboard Champion is the last remaining Australian in the draw after eliminating good friend, and roommate Jared Neal (AUS) in Round 5. Ingleby was extremely patient in the All-Australian affair, only catching three waves in the 25 minute heat, but easily amassed the score to advance.

"It’s never fun having a mate and the guy you’re sharing a room with in a heat," Ingleby said. "Jared (Neal) is one of those guys who can get the good waves and smash it. Still, it’s never fun knocking out one of your good mates. It’s really good to be into the Quarterfinals tomorrow, it’s going to be really tough from here on in."

Taylor Jensen (USA), reigning ASP World Longboard Champion appears to be over the illness that kept him bedridden the few days before the event, posting impressive wins today in Round 3 and 4 today. Jensen will continue his title defence campaign in Quarterfinal 2 against fellow American Cole Robbins (USA).

"I’m feeling a lot better today," Jensen said. "After my heat yesterday I went back and ate some food for the first time in a while and got some energy back and today in my heats I felt really good. I’m not thinking about winning back-to-back ASP World Longboard Titles, it’s one event so anything can happen. I’m just going out to try and win the event, if I win the event I win the ASP World Longboard Title, if not there’s always next year or the year after. I’ve already got a trophy so now the pressure is off and I can just go out and surf."

Kai Sallas (HAW) was the standout performer of the day posting the event’s highest single wave score, a 9.80 (out of a possible 10). Sallas went on to win his Round 4 heat and book a spot in the Quarterfinals against Edouard Delpero (FRA).

"That 9.80 wave felt good," Sallas said. "It just had the perfect angle on it to get some speed and a critical noseride. It was a perfect wave. I would have been a kook not to get at least an 8.00 on it. I’ve been lucky with waves. I’m really stoked that the event directors have gone to the effort of moving this far down the beach. It’s a lot of work, but it gives us a legitimate shot at at winning an ASP World Longboard Title in some damn good waves for longboarding."

A call will be made at 7am for a possible 7:30 start and it’s likely that the ASP World Longboard Champion will br crowned tomorrow.

SOURCE: boxscorenews.com
Editorial Message
This site contains materials from other clearly stated media sources for the purpose of discussion stimulation and content enrichment among our members only.
whatsonsanya.com does not necessarily endorse their views or the accuracy of their content. For copyright infringement issues please contact editor@whatsonsanya.com