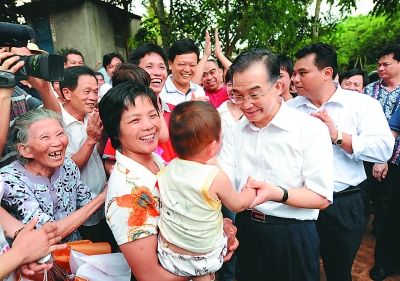 Premier Wen Jiabao who just returned from a visit to foreign country paid high attention to the flood disaster in Hainan Province. On the afternoon of October 10, Wen called Wei Liucheng, Secretary of the CPC Hainan Provincial Committee and Chairman of the Standing Committee of the Hainan Provincial People's Congress, to give his key instructions in terms of flood prevention, rescue and relief work. He required making every effort to finish the post-disaster reconstruction and epidemic prevention in next step and recover the normal life and production sequence as soon as possible.

Wei Liucheng briefly reported the flood prevention, rescue and relief work in Hainan to Premier Wen Jiabao. He said that Hainan was encountering historically rare torrential rain disaster. Though it was serious, injuries and deaths were few. Especially when the Chizhi Reservoir in Wenchang breached, 6,137 people living in the downstream were safely transferred without injuries and deaths. Party members and cadres from basic levels in cities, counties, towns and villages had made great contributions. Wei said to Wen that the Party Central Committee and the State Council may rest assured that the key point for the next-step task of Hainan Province would transfer to the post-disaster reconstruction and arrangement, epidemic prevention and guaranteeing the life and production of the masses.

Wen Jiabao pointed out that judging from the flood disaster in 2000, Hainan was usually lack of water and the infrastructures were relatively poor; therefore serious disaster easily occurred once encountering rainstorm. The relief work in this time was excellent and all levels of Party Committees and governments had been putting the life safety of the masses in the first place, especially that party members and cadres from basic levels had played important roles. They deserved praise. Wen emphasized that the next-step task was to finish the post-disaster reconstruction and epidemic prevention to recover the normal life and production sequence as soon as possible. All departments of the State Council would provide full support.

Previous news: Over 440,000 evacuated in Hainan after the heaviest rains for decades

Next news: Home price in Sanya ranks 5th in China