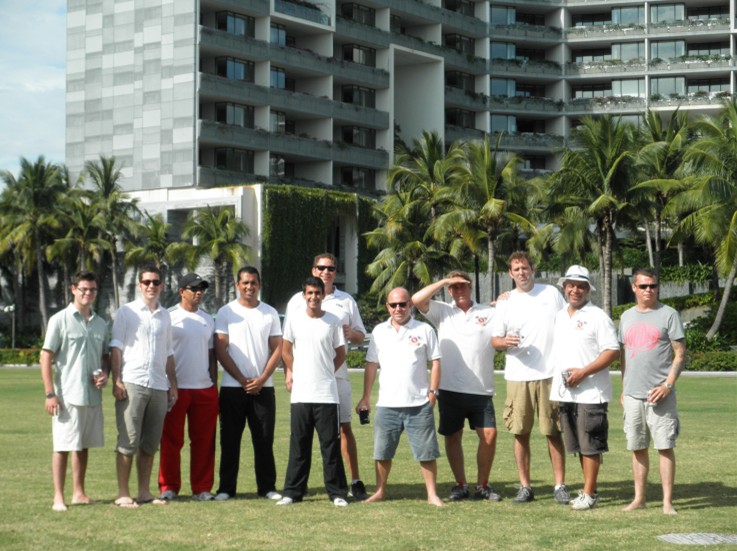 "OMG” is an acronym I usually despise, being an old fuddy duddy, new to text speak, but in this case, I can see it’s usefulness.

"OMG” is how I would describe the venue the Sanya Cricket Club played at on Saturday. It does not get much better. I mean, imagine the most idyllic village green in England on a summer’s day, then add air-brushed perfection.

Pause for thought. Imagine an lawn ringed by green leafy oak trees, Victorian rose gardens… and an A-road. Victorian architecture is quaint, but it is also old, which is what Victorian club house toilets are likely to be.

But a manicured lawn in traditional cricket oval shape, with a mown pitch, perfect wicket, beside a contemporary (read classy and posh) club house, with upstairs members bar offering a view of the playing green, beyond which lies palm trees, white sand and the beach.

Really, no village cricket club in the world could boast such a setting.

And this, ladies and gentlemen, is where the Sanya Cricket Club played this Saturday. A cricket ground with the poshest loos this side of Poole.

Shane Templeton, chief groundsman, arrived the day before with green roller and mower on the back of a truck, mowing the pitch and provide the markings to the satisfaction of Hotel Intercontinental’s GM, Geoff, making sure all was level and correct.

Playing cricket on a proper pitch, with proper bats on proper grass might have been a bit intimidating for many of us beach cricket novices, but the lads who love to play proper cricket were loving it. This is very nearly REAL cricket, and how our cricket could be. It is certainly appears to be a little more formal than our normal, scruffy beach cricket, but for those who fancy a swim, the beach is right there.

I counted 43 people who attended during the day, which included 15 players, 2 officials, 20 spectators and 6 children who had their very own cricket stumps, balls and kid-sized bats, set up to play on the sand close by.

There weren’t that may players to arrive on time, so we made do with the nine we had at 3:00pm and had a round of “individuals”. Unsurprisingly, George and Asitha won that by a mile, popping balls across the boundaries whenever they seemed to fancy it.

As the day progressed, more players turned up. Some didn’t know they were players until they turned up, mind you. But we did have enough to play “teams” for the second innings. Teams is infinitely more fun to play.

Ostensibly the division was “East Sanya vs West Sanya”, but in reality, it was “captain’s pick”. Julian Robertshaw volunteered to be umpire, and did a spectacular job for his first time, strong in conviction and judgement. Bill George turned over the scoreboard while Simon (the larger) and Simon took captaincies.

Fading light towards the end of the second innings meant that play stopped before the final two overs, with a scoreline of 21 to 19, which could have ended up being 50 to 19 or minus 10 to 19; we will never know.

What we do know is that we all had a good fun day out at the cricket.

There were oodles of funny catches, throws, fallings-over and a few balls needing to be fished out of the wee creek with groundsmen standing by with nets on poles.

For those enthusiasts who are interested, we decided to use the heavier, harder, red beach cricket ball in favour of the light tennis-ball-type beach cricket ball. Using a ball approaching the weight and density of a real leather cricket ball added a bit more excitement to the game where one treats the ball with more respect than normal.

Presentations and dinner were held in the “Peoples Royal International Cricket Club of Sanya Pavilions” (formerly known as the Beer Factory Restaurant & Bar). A wonderful three course meal and oodles of micro-brewed beer was given. Many thanks to Terence Ng, his staff and Dan Smith for orchestrating this.

Player of the Day was deserved and won by rookie, Peter Morch, the Canadian who only came for moral support and to be club photographer for the day. Typical of those who insist they have never played before, stepping up to the mark and smashing balls around the field like a life-time pro, landing one of the two “6’s” scored for the day.

Polo shirts (donated by Kingship Superyachts) and Hainan Beer shirts (donated by Asia Pacific Breweries) were given as prizes to top run scorers Asitha and George, to new-comer of the day, Ian Worsley, best umpire Julian Robertshaw and to most enthusiastic player, Spencer Macdonald.

Drinks followed dinner, as tradition dictates, in the beautifully appointed restaurant with a lively live band. And a good evening followed a good day at the cricket.

Looking forward to seeing you all next match, Saturday 3 November, where the Sanya Cricket Club will join forces with the Surfing Hainan Open at Riyue Bay. Stay tuned for The Cricket Tour Bus details.

SOURCE: Sanya Cricket Club
Editorial Message
This site contains materials from other clearly stated media sources for the purpose of discussion stimulation and content enrichment among our members only.
whatsonsanya.com does not necessarily endorse their views or the accuracy of their content. For copyright infringement issues please contact editor@whatsonsanya.com

Next news: Ramon-Sinkeldam wins Stage 5 of Tour of Hainan 2012