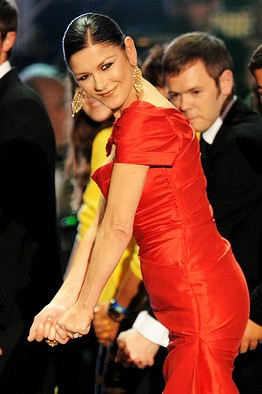 Actress Catherine Zeta-Jones onstage in Cardiff, Wales, at a celebration ahead of the Ryder Cup competition in late September
Later this month, Catherine Zeta-Jones, Christian Slater, Hugh Grant, Michael Phelps and Matthew McConaughey will make their way to Haikou, a city in China’s Hainan Island. The stars will participate in the Mission Hills ‘Star Trophy’ tournament, the first major celebrity golf pro-am event to be held in China, on Oct. 28 to 31.

‘We envision it becoming Asia’s equivalent of Pebble Beach’s AT&TCatherine Zeta-Jones National Pro-Am, a tournament that fans of golf and film around the globe look forward to year after year,’ says Stephen Reynolds, a public-relations manager for the event. The Star Trophy tournament, unlike the Pebble Beach event, is not charity-affiliated — all proceeds will go to Mission Hills.

The celebrity tournament is organized by the Mission Hills Group, which owns the 12-course behemoth, Mission Hills Shenzhen, and is timed to mark the opening of its golf resort, Mission Hills Haikou on Hainan Island.

Many of Asia’s celebrities are joining the group, too, including Hong Kong actors Aaron Kwok and Eric Tsang, Chinese entrepreneur Li Ning, and Japanese actor Sanma Akashiya. In total, 20 stars from the East and West will attend, joining 20 professionals and 120 amateurs. During the first two days of the four-day tournament, a celebrity or a professional will play with three amateurs. On the last two days, each celebrity will pair with a professional golfer to compete in a 36-hole playoff for $100,000. The pro golfers will also play simultaneously for a grand prize of $1.28 million. Greg Norman, Nick Faldo and Annika Sorenstam are among the pros expected to play.

Next news: Over 440,000 evacuated in Hainan after the heaviest rains for decades