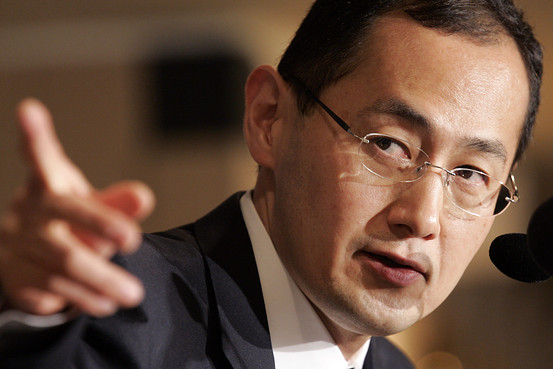 Japanese scientist Shinya Yamanaka.
British scientist John B. Gurdon.
Two stem-cell researchers have won this year’s Nobel Prize in Physiology or Medicine for their groundbreaking work in cellular reprogramming, a technique that unleashed a wave of advances in biology, from cloning to the possible treatment of diseases using a patient’s own cells.

Experiments by John B. Gurdon of the United Kingdom and Shinya Yamanaka of Japan showed that mature cells taken from the body could be changed to an embryonic-like state in a laboratory dish, a head-spinning discovery that is the biological equivalent of turning back time.

Their work "has changed the accepted dogma" that mature cells are condemned to exist in a specialized state, said Martin Evans, a British stem-cell pioneer who shared the 2007 Nobel Prize for medicine, in an interview.

Cellular reprogramming triggered the rewriting of biology textbooks and spawned thousands of new experiments in labs around the world. It led to the first cloned animal—a frog—and to the first cloned mammal, Dolly the sheep. It also paved the way for deriving embryonic-like stem cells without destroying human embryos, sidestepping an ethically contentious approach.

Once cellular reprogramming is used to turn mature cells into embryonic-like ones, those cells can be further manipulated and turned into heart, nerve, muscle and virtually all other tissues types. This freshly made tissue—from an Alzheimer’s patient, for example—could be inexpensively grown and studied in a lab dish.

Drug firms have already started to test drugs on human tissue made through reprogramming. Next year, fresh retinal cells derived in this way will be transplanted into people for the first time, in a Japanese trial for patients with an eye disease known as macular degeneration.

Scientists used to believe the fate of our cells was a one-way trip. We start as a fertilized egg; become an embryo consisting of immature, undifferentiated cells; then gradually develop into a body of specialist cells, including blood, bone, muscle and skin.

In 1962, Dr. Gurdon, while trying to understand how simple, undifferentiated cells became all the other cells in the body, performed an audacious experiment. He removed the DNA from a frog egg and replaced it with the DNA of a mature cell taken from a tadpole. The egg developed into a healthy, cloned tadpole. (The same approach would be used to create Dolly the sheep in 1996.)

The frog experiment was an effort to answer "a pure scientific question about how we came to be formed. There was no foreseeable therapeutic benefit," said Dr. Gurdon in an interview. Now 79, Dr. Gurdon is a professor at the Gurdon Institute, part of Cambridge University.

Dr. Yamanaka, 50, was born in the year Dr. Gurdon did his frog experiment. Dr. Yamanaka would eventually ponder a related question: Could the Gurdon reprogramming trick be done without using eggs—which, in human cases, can be hard to come by?

Dr. Yamanaka had the answer a few years later. He demonstrated that by adding just four genes to a mature cell, he could turn it into an embryonic-like state. He first achieved this with mouse cells, and in 2007 he reported the same result for human cells. He transformed those cells, in turn, into heart, nerve and other human tissue in a lab.

"Without [Dr. Gurdon’s] work we would never have started this risky project 12 years ago," said Dr. Yamanaka, who is a professor at Kyoto University and affiliated with the Gladstone Institutes in San Francisco, in an interview.

Since Dr. Yamanaka’s breakthrough, many labs have altered how they do stem-cell research. Some years ago, Ian Wilmut, the scientist who created Dolly the sheep, abandoned a cloning-based approach in favor of the Yamanaka method. Last week, Japanese scientists said they used the Yamanaka technique to make mouse eggs.

Though approaching 80, Dr. Gurdon remains as busy as before. He was at his lab at 8.30 a.m. Monday when someone from the Nobel committee called with the news. Dr. Gurdon said he intends to keep plugging away "because I haven’t answered the question I am fully trying to answer: What is the mechanism that the egg uses to reverse differentiation?"