Sherrie Walter in hospital on Tuesday after her latest operation to remould her new left ear which was attached to her head in March
For the past two years Sherrie Walter has been unwilling to pull her hair into a ponytail and unable to wear a pair of matching earrings after surgery to deal with an aggressive form of skin cancer.

In 2010 a persistent sore inside her ear was eventually diagnosed as basal cell carcinoma and because it had spread to the surrounding tissue, Sherrie had to endure most of her left ear being removed along with parts of her skull and ear canal.

Disfigured and deaf on one side, Sherrie, 42, was offered a chance at a groundbreaking procedure that would remove cartilage from her rib to fashion a entirely new ear for her, which would then be placed under the skin of her arm for months to grow.

To date the entire process has lasted close to 20 months and even though there are still more cosmetic surgeries to come, Sherrie’s new ear is now attached to the side of her head.

‘I feel like an experiment,’ said Sherrie talking about the multiple procedures she has been through at Johns Hopkins Hospital in Maryland.

Described by the surgical team as the most complicated ever ear reconstruction carried out in North America, the new organ spent four months under the skin of her left forearm before it was transferred to her head in March.

The team was led by Dr. Patrick Byrne, an associate professor in otolaryngology-head and neck surgery at the Johns Hopkins University School of Medicine

‘I thought of this exact strategy many years before and really was looking for the right patient to try it on,’ said Dr. Byrne.

Following aggressive treatment to fight skin cancer, most of Sherrie’s left ear was removed along with parts of her skull, ear canal and lymph nodes
Four-years ago Sherrie did not think much of a scab on her ear which would not go away, thinking it was just slow to heal.

‘I kept breaking it,’ said Sherrie to the Baltimore Sun Times.

‘I thought it was something I was doing that wasn’t allowing it to heal.

Prescribed antibiotics for the sore, the wound did not go away and eight months later, Sherrie made an appointment with a dermatologist.

‘She looked at it for less than five minutes and she said, ‘You have cancer,’ said Sherrie who lives in Bel-Air, Maryland.

Hoping that the cancer simply had to be cut away, Sherrie discovered that an aggressive treatment was required which removed seven layers of skin but left her ear still intact.

However, in October 2010, Sherrie found blood inside her ear and was told that the cancer had spread to her left ear canal.

In a 16-hour procedure doctors removed Sherrie’s ear canal, ear drum and most of her left ear and also had to remove neck, gland, lymph node tissue and part of her skull.

Despite being disfigured, Dr. Byrne told Sherrie that she did have options for regaining her ear.

One was the prosthetic option which would have to be attached each day.

However, most prosthetic ears are attached with clips to a titanium rod, but Sherrie’s skull bone had been removed and therefore could not support the rod.

‘She would have had to deal with tape and glue and it would have been a royal pain in the butt,’ said Dr. Byrne to the Baltimore Sun Times.

‘It just didn’t sound appealing to her. And I agreed.’ 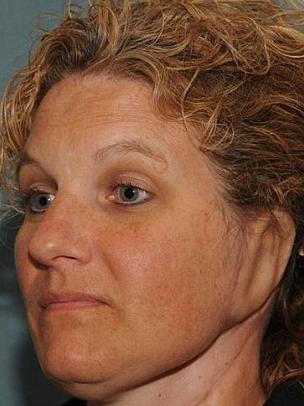 Before her latest round of cosmetic surgeries to improved her new ear these pictures of Sherrie show her progress as of September 2012
The doctor then suggested the production of an entirely new ear, which Sherrie opted to attempt, despite being told the process would take near to two years.

‘It seemed a little strange, but I was willing to try it,’ said Sherrie.

Using cartilage taken from her ribs to construct and carve the new organ, doctors decided to place the constructed ear inside her left forearm.

However, because the skin around arms does not stretch that well, doctors had to expand her arms surface by using a saline to balloon out the skin.

This took weeks and then in November of 2011, the new ear was inserted into her arm – visiblly growing under the surface.

‘We implanted the ear near the wrist and just let it live there so all the skin could grow into the ear,’ said Byrne.

While the ear spent four months inside her, Sherri and her husband Damien made light of the situation by lifting her arm in the air and saying to friends, ‘I can’t hear you.’

In March, the ear was re-attched to her head and doctors began working on how to cosmetically mold it so that it would look more like her right ear.

And on Tuesday of this week, Dr. Byrne cut the skin below the ear and pulled it back so that it would begin to resemble a lobe.

However, it’s been an emotional ride for Sherrie and her husband.

‘It just didn’t seem like anything we’d ever heard of so to see the progression and to see how everything has come out has been just great to kind of come to fruition,’ said Sherrie.

Once she heals, the new ear should last for years according to Dr. Byrne.

‘In my opinion, how it’s just a matter of time as the swelling goes down and it heals, I believe she will have a normal looking ear,’ said the doctor.

Though recovery isn’t over, Sherrie considers herself lucky and hopes others learn from her story.

‘And it’s a cliche but use the sunscreen and if you are not sure about something, get it checked because that’s what I didn’t do,’ said Sherrie.

Next news: Passenger traffic at Sanya Phoenix Airport to hit 240,000 during long holidays