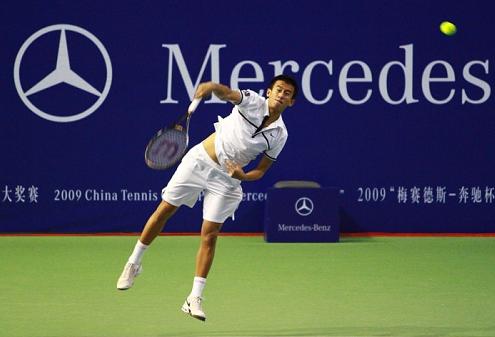 Mercedes-Benz Cup China Tennis Grand Prix (file photo)
Scorching tennis hits China every October, but it’s not all about the world elite slugging it out in Beijing and Shanghai.

This year’s event will shift to the coastal city of Sanya, Hainan province, from Oct 21-28, after four consecutive events in Nanjing, Jiangsu province.

The tournament will attract more than 120 young players in singles and doubles at a 32-player draw challenger competition from Oct 21-23.

The top 10 male and female players will earn berths to battle some of China’s top players, including Grand Slam doubles champion Yan Zi, who came back from a year-long retirement last month, world No 47 Peng Shuai and the country’s leading male player, Zhang Ze, in the 16-seed championship stage of the five-day event which boasts total prize money of $150,000.

After claiming last year’s title, Zhang built on that performance this season, improving his ranking to world No 167 while smashing Pan Bing’s 17-year standing record of No 176.

The 22-year-old also became the first male from the Chinese mainland to win a Grand Slam qualifying match in the past 17 years after passing the first round of the French Open qualifiers and then copied that victory at the Wimbledon qualifiers.

Another promising male, Wu Di, a quarterfinalist at the Australian Open’s junior event in 2007, also cracked the top 200 (No 186) this year and expects to fine tune his form at the Sanya tournament.

Without having to face big stars at the China Open and Shanghai Masters, the young players should be able to hone their skills.

"Compared to foreign players at the same age, we lag behind due to a lack of experience. Here we can concentrate on ourselves, improve our skills and learn our shortcomings," said 21-year-old Wu.

On the women’s side, a group of budding players including Zheng Saisai, Wang Qiang and Duan Yingying will draw attention.

In addition to the competition, the tournament will also feature a week-long series of charity activities, campus promotions and youth clinics.

Next news: Car rental companies in Sanya to get a boost for upcoming holidays