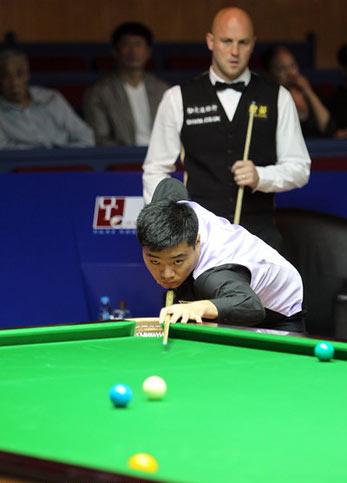 Ding Junhui, front, plays against Mark King of England during their Shanghai Masters snooker tournament in Shanghai, Sept 18, 2012. [Photo/CFP]
China’s snooker talent Ding Junhui threw away a 3-0 lead as he was knocked out of the Shanghai Masters by Mark King in his first appearance at the home event. also crashed out.

World number one and reigning champion Mark Selby was also out as he was humbled 5-1 by Jamie Cope, despite Cope not having to make a break of more than 40 until the final frame.

The home favourite Ding recovered to lead 4-3, only for King to silence the crowd by taking the final two frames.

Another Chinese Lu Haotian also suffered 5-2 loss to Mark Allen despite his lead in the first three frames.

Chinese locals Chen Feilong and Jin Long at least gave the crowd something to cheer about, as they saw off Fergal O’Brien and Jimmy Robertson in their respective wildcard round matches.