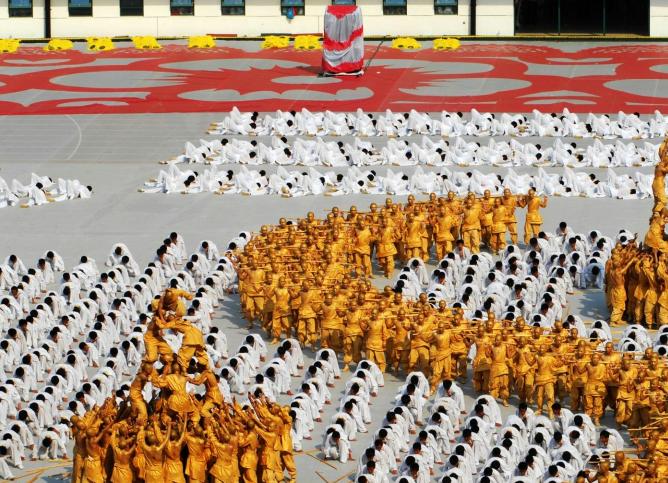 The opening ceremony of the seventh National Peasants’Games, held on Sunday in Nanyang, Henan province. The equadrennial gathering of Chinese farmers has welcomed 4,689 athletes, team leaders, coaches and referees. Participants in the games compete in 15 sports and more than 198 events. XIANG MINGCHAO/CHINA DAILY
Chinese Vice-Premier Hui Liangyu declared open the seventh National Peasants’ Games here on Sunday, which was the first multi-sport gala China held after 2012 London Olympics and Paralympics.

Based on the concept of thrift and conciseness, the newly built 35,000-seat Nanyang Stadium witnessed a "shorter" and "smaller" 75-minute opening ceremony.

The opening ceremony was not held at night but in the afternoon, leaving out light, electronic and other high-tech means and fireworks, which will at least save several million yuan.

The seventh edition of the quadrennial get-together for Chinese peasants, debuted in 1988, opened its arms for 4,689 athletes, team leaders, coaches and referees from China’s 32 provinces, autonomous regions and municipalities, including Taiwan.

In order to deliver a successful Games, the organizers have built or refurbished 15 stadiums and other facilities in Nanyang, a southern city in Henan province, known as the biggest granary in China’s central plain with about one-ninth of China’s 900 million peasants in total.

As more and more Chinese peasants have become well-off and paid more and more attention to their physical and mental health, field work is no longer the only occupation for them. Unlike most games that highlight the limits of physical strength and competitiveness, the games for peasants emphasize more on recreation and less on the results.

The Games boasts 15 sports and over 198 events, featuring not only traditional sports like athletics, basketball, table tennis, swimming, Xiangqi (Chinese chess) and Taiji (shadowboxing), but also some special ones, such as food-carrying, dragon boating, kite flying, shuttlecocks and Yangko dance, a traditional folk dance commonly performed in China’s northern provinces which was introduced into last edition Games held in Quanzhou four years ago.

With such enthusiasm keeping on, about a hundred thousand volunteers scattered around the city to provide guiding and helping service for the tourists and the Games’ participants.

The seven-day tournament will conclude on September 22.