Totally Reem: Tess Giddings pictured at her heaviest (left) and after slimming down from a size 18 to a 10

Tess Giddings, 24, who slimmed down from a size 18 to a 10, reveals that watching the reality TV star shed the pounds on the popular ITV2 show spurred her on to change her diet.

‘The Only Way is Essex was my favourite thing on telly – all the girls look so glamorous, I’d never dream I could look like them in a million years,’ says Tess.

‘I’d tried every diet under the sun, but nothing worked, and I never had any energy to do anything – I just sat around in front of the TV all day.

‘I read in a celeb magazine about a diet that Lauren Goodger had been on, and she looked great.’

The mother-of-four decided to follow the Cambridge Weight plan, a low calorie diet made up of branded shakes, bars, soups and porridge, after discovering that the strict eating plan had helped Lauren transform her figure.

‘Lauren had lost so much weight on the plan I decided to give it a go too,’ she explains.

‘I just can’t believe the difference in myself – I’m so confident and happy now it’s as though I’m a different person.

Tess first began struggling with her weight when she fell pregnant with her oldest son Jacob, now six, and the pounds continued to pile on after the births of her younger children Savannah, four, Amiah, two, and Zion, seven months.

She began snacking on chocolate bars and eating takeaways for dinners and saw her waistline expand even further.

Unhappy with her appearance, Tess started staying at home in front of the television as she lacked the confidence to socialise.

‘I’d always say I’d start a diet tomorrow, and then stuff my face to enjoy myself before it started.

‘But I never managed more than a couple of days on the diet – sometimes only a few hours – and it would start all over again.

‘I’d eat constantly all day long – just grazing on food while I looked after the children.

‘I didn’t have proper meals at all, just ate whatever I could lay my hands on – I’d raid the children’s sweet tin before they’d had chance to get their hands on it.’

Tess decided she needed to make a change after overhearing her son Jacob complain about her lack of energy to her 32-year-old husband Chris.

‘Chris is very active, and one day I heard Jacob say to him: “Mummy’s no fun anymore, she never does anything with us.”

‘I was devastated, but I didn’t know how to even begin losing the weight.’

After reading that Lauren had shed almost two stone on the Cambridge Weight Plan, Tess decided to take the plunge.

The plan restricts dieters to a very low number of calories a day for a short period in order to kick-start rapid weight loss.

Healthy ‘real’ food is slowly introduced over the course of a few weeks – until dieters are able to find the right balance. 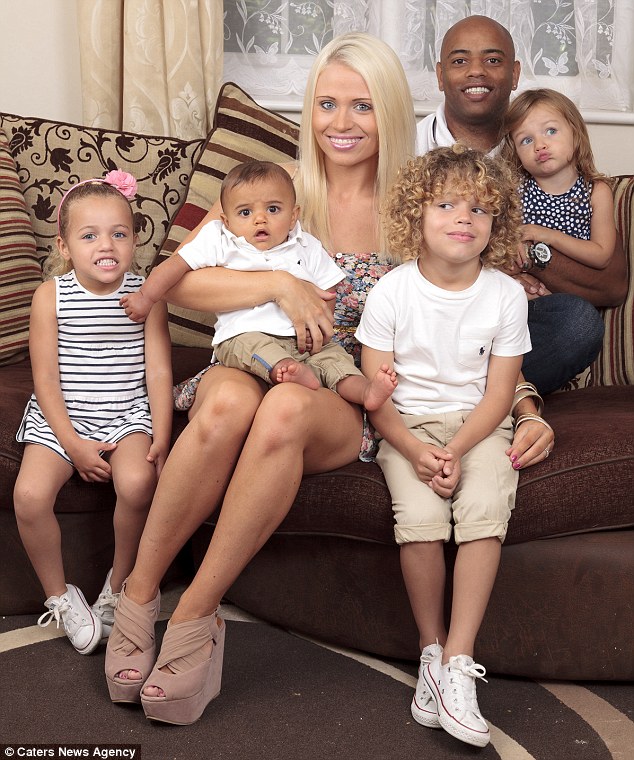 ‘My husband and kids are so proud of me’: Tess with her husband Chris and their children, Jacob, six, Savannah, four, Amiah, two, and seven-month-old Zion

A lot of people told me I’d never succeed on Cambridge, or that I’d put all the weight back on as soon as I started eating normal food again, but I’ve proved them wrong, just like Lauren did,’ she says

‘I eat really healthily now, and home cook all my meals. I still treat myself on a Saturday, but for six days a week, I can keep to a healthy meal plan.

‘My husband and kids are so proud of me – I’ve got so much more confidence now, and the energy to run round with my kids in the park.

Tess has now gotten rid of her old clothes and treated herself to a new, sexier wardrobe.

‘I threw out all of my old clothes and realised everything was black and grey – now I love wearing brightly coloured, sexy clothes,’ she says.

‘I can shop for clothes I like, rather than ones that are slimming.

‘I’m just so glad that Lauren gave me the thinspiration I needed to change my life!’

Tess’s role model Lauren, 25, quit The Only Way is Essex last month after starring in six series of the reality TV show.

During an interview with the Sunday Mirror, she admitted that constant scrutiny over her weight had contributed to her decision to leave.

‘I felt under so much pressure. Most of the girls on TOWIE are quite skinny… Next to the others, I’d be panicking over whether my arms looked fat or how big I’d look if I was sitting down,’ she said.

‘I’d even beg producers to let me sit at a table so I could hide my legs underneath.’