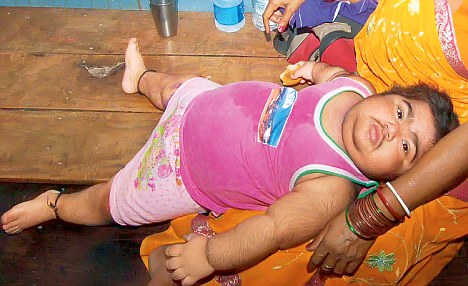 Eighteen-month-old Aditya Kumar with facial and body hair
At first glance, Aditya Kumar looks all grown up. But what belies his beard and moustache look is his small frame.

In fact, Aditya has not even celebrated his second birthday, but a rare disorder makes him look much older than his age.

Born in a family of an agricultural labourer in Madhepura district of Bihar, 18-month-old Aditya is suffering from Cushing’s Syndrome. It is a rare disease caused by acute hormonal disorder in which hair grows all over a person’s body.

But Aditya was not born this way. His parents claimed he was a normal, good-looking child till his first birthday earlier this year. But after that he started showing rapid signs of ageing.

He started gaining abnormal weight and before his parents could realise what was happening, the child had started growing a moustache and beard like an adult man.

His worried parents rushed Aditya to the local doctors, but they could not provide him any succour. He was later taken to the clinic of Dr S.A. Krishna, a leading paediatrician in Patna, by his father Vinay Sao and his grandmother. Dr Krishna, who examined the boy, said Aditya was suffering from Cushing’s Syndrome and might have to undergo an operation or radiation therapy for possible cure.

He referred the boy to the All India Institute of Medical Sciences (AIIMS) in Delhi for further treatment. ‘His family’s financial condition is not good and wanted his treatment to be done in Patna. But I asked them to go to AIIMS for proper treatment,’ Dr Krishna said.

He claimed the disease had occurred primarily because of hormonal disorder. ‘I have seen the child’s ultrasonography report. It shows a tumour in the adrenalin gland above his kidney, which might be the reason behind the secretion of overactive hormones.

But more tests are needed to determine the exact cause of the child’s disease,’ he said. ‘Aditya needs to undergo comprehensive tests at the endocrinology department of AIIMS,’ Dr Krishna added.

Previous news: The woes of fishermen in Tanmen village, Hainan