All over: Lance Armstrong has now been stripped of his seven Tour crowns 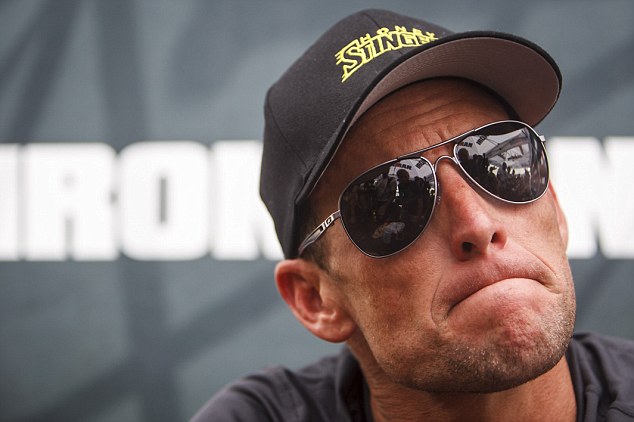 ‘Innocent’: Armstrong still claims he did not use performance enhancing drugs and says the charges against him are ‘unconstitutional’
Lance Armstrong’s status as an icon of sport is in tatters after he was stripped of his seven Tour de France victories amid allegations he was a systematic doping cheat.

At the end of cycling’s darkest of many drug-tainted days, the American who beat cancer was punished after deciding to stop fighting the claims.

The United States Anti-Doping Agency (USADA) issued a statement which laid out a litany of charges against the 40-year-old, banned him from cycling for life and erased him from every race in which he had competed since 1998.

•June 2012 – USADA officially charges Armstrong with doping, based on blood samples from 2009 and 2010, and testimonies from other cyclists. Armstrong was charged in a letter from USADA, along with five others, including former team manager Johan Bruyneel.

•July 9 – Armstrong files lawsuit against the USADA, which a federal court judge threw out later the same day. The following day he files a revised lawsuit, once again asking to stop the agency from stripping his seven Tour de France titles and banning him from the sport for life if he failed to submit to arbitration over alleged doping violations.

•Armstrong’s lawsuit claimed that the USADA did not have jurisdiction and that his right to due process was being violated but it was thrown out by U.S. District Judge Sam Sparks on August 20, who upheld the USADA’s jurisdiction in the case.

•August 23 – Armstrong says he is ending his fight against the USADA, but maintains they lack jurisdiction to strip him of his Tour de France titles.
.Friday’s events bring an ignominious end to one of the greatest sporting fairytales ever told. He was the Texan who was given a less than 40 per cent chance of living after testicular cancer spread to his lungs, abdomen and brain.

But three years later in 1999, after chemotherapy, he won his first Tour de France at the age of 28. His reputation was further enhanced by his charity work with the Lance Armstrong Foundation, which raised £250million through the sale of yellow Livestrong bracelets.

For a decade he was strident and litigious in protecting himself from innuendo that suggested his success — which won him a £80m fortune — was built on drug taking.

But in Friday’s final chain of events, knowing all the evidence USADA had and having lost a lawsuit on Monday challenging the body’s jurisdiction, he effectively turned the needle of suspicion upon himself: he said he would not contest the charges brought by USADA.

It was a course of action that was interpreted by all but Armstrong’s most ardent supporters as evidence of guilt.

It saved him from the drawn-out embarrassment of a public hearing. It also allowed him to maintain his innocence even as he publicly quit the fight.

USADA’s statement read: ‘The anti-doping rule violations for which Mr Armstrong is being sanctioned are: 1) Use and/or attempted use of prohibited substances and/or methods including EPO, blood transfusions, testosterone, corticosteroids and masking agents.

3) Trafficking of EPO, tes-tosterone, and corticosteroids.

Armstrong, echoing his typically defensive tone of the last few years, said in an 871-word statement: ‘If I thought for one moment that by participating in USADA’s process, I could confront these allegations in a fair setting and — once and for all — put these charges to rest, I would jump at the chance.

‘But I refuse to participate in a process that is so one-sided and unfair. Regardless of what (USADA chief executive) Travis Tygart says, there is zero physical evidence to support his outlandish and heinous claims. The only physical evidence here is the hundreds of controls I have passed with flying colours. I made myself available around the clock and around the world. In competition. Out of competition. Blood. Urine. Whatever they asked for I provided. What is the point of all this testing if, in the end, USADA will not stand by it?’ He added: ‘There comes a point in every man’s life when he has to say, “Enough is enough”. For me, that time is now.

‘I have been dealing with claims that I cheated and had an unfair advantage in winning my seven Tours since 1999. Over the past three years, I have been subjected to a two-year federal criminal investigation followed by (USADA chief executive) Travis Tygart’s unconstitutional witch hunt. The toll this has taken on my family, and my work for our foundation and on me leads me to where I am today — finished with this nonsense.’

Tygart said: ‘This is a heart-breaking example of how the win-at-all-costs culture of sport, if left unchecked, will overtake fair, safe and honest competition, but for clean athletes, it is a reassuring reminder that there is hope for future generations to compete on a level playing field without the use of performance-enhancing drugs.’

The incriminating evidence against him was pieced together by USADA, following on from a US federal investigation. Several former team-mates, including proven dope cheats Floyd Landis and Tyler Hamilton, gave evidence. A dozen witnesses agreed to testify.

As for cycling’s governing body, UCI, they questioned USADA’s jurisdiction in expunging Armstrong’s record. They could yet challenge the action at the Court of Arbitration for Sport.

Going to CAS seems pointless. Why fight if he is a cheat? They would do better standing up against the port’s abysmal record.

All but three of the top five riders in the seven Tours Armstrong won had been implicated in drug use before Friday. Now that figures stands at two.