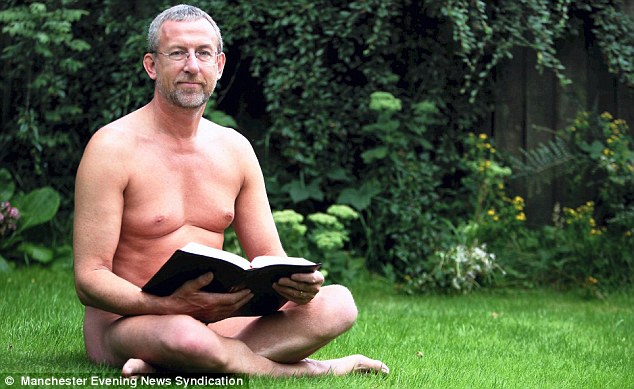 Taking a leaf out Prince Harry’s book?: Reverend Bob Horrocks is both a Church of England vicar and a practising naturist. The Bolton-based 55-year-old will appear in a TV documentary about attitudes towards the naked human body. 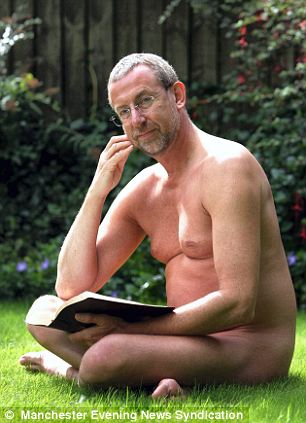 Naked before God: Reverend Horrocks says the Bible doesn’t condemn but celebrate nakedness.
His flock, as you might expect, are more used to seeing him in a cassock and dog collar.

But the Rev Bob Horrocks is rarely happier than when he is entirely defrocked.

The 55-year-old, a keen naturist who holidays at clubs for those of a similar inclination, defended his hobby yesterday, saying there was nothing anti-Christian about it.

‘If someone sees a body uncovered, people think that’s somehow sexualised and they shouldn’t be looking at it,’ he said.

”They snigger – they are made to feel uncomfortable because it’s not part of their normal existence.

‘So much of advertising is persuading people they are not sufficient in themselves, and yet God has gifted us with the bodies we have.’

The reverend, the vicar of Seven Saints, Farnworth, Bolton, discovered naturism after straying on to a nudist beach while on holiday on the Canary Island of Fuerteventura six years ago.

‘I felt set free. But then, being a Church minister, I thought, “Is this right?” I researched the Bible and I found there was a lot of positive stuff – there is nothing condemning simple nakedness.

‘It was part of life at the time of Jesus. It’s something I would’ve loved to have discovered when I was a lot younger.’

But parishioners with a more traditional approach to clothing won’t find the vicar in the nude.

‘I mostly enjoy naturism on holiday,’ he said. ‘The English climate doesn’t lend itself too well to it!’

Mr Horrocks volunteered to take part in a TV documentary as chair of the Christian Naturist Fellowship.

He said: ‘I mostly enjoy naturism on holiday. The English climate doesn’t lend itself too well to naturism!’

Mr Horrocks has posed nude to discuss his views for the Channel 4 documentary entitled ‘Is it a sin to bare our flesh?’

David Marshall, spokesperson for the Diocese of Manchester, said: ‘The diocese supports discussion on body image and the pressures placed on individuals as a result of advertising, stereotyping and the inappropriate promotion of body perfection.’

Next news: Haikou to put 60 electric buses into operation in 2nd half of 2012