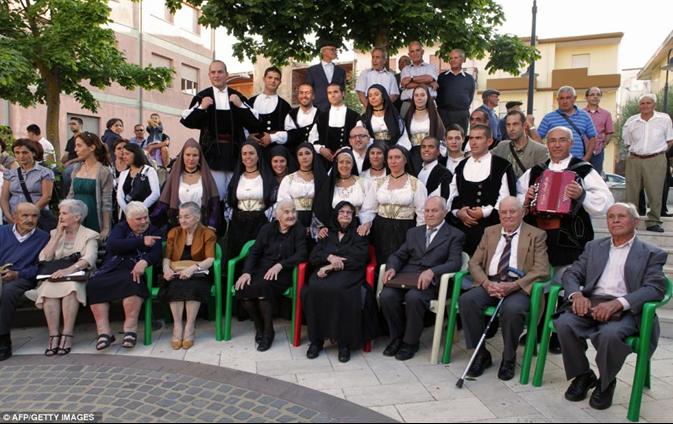 The difference is that Consolata is 105 today and, unlike any other family on earth, the Melis family has just been entered into the Guinness Book Of Records as the world’s oldest siblings.

Consolata and her eight brothers and sisters clock up a whopping 818 years between them and all live in the same village on the island of Sardinia, famous for extraordinary longevity.

Consolata is the oldest of the six sisters and three brothers of the Melis clan who heed from from the village of Perdasdefogu in the southeastern corner of Sardinia, an autonomous region of Italy which has some of the oldest people in the world.

The siblings say their secret lies within hard work, being surrounded by their 150 children, grandchildren and great-grandchildren as well as lots of minestrone soup.

‘We eat genuine food, meaning lots of minestrone and little meat and we are always working,’ middle-brother Alfonso told the Guardian. Alfonso stays active running the local bar and enjoys tending to his garden where he grows beans, aubergines, peppers and potatoes.

His advice of work and minestrone was echoed by his older sister Claudia who said: ‘ You just keep working and you eat minestrone, beans and potatoes.’

Claudina still attends mass at the local church every week. 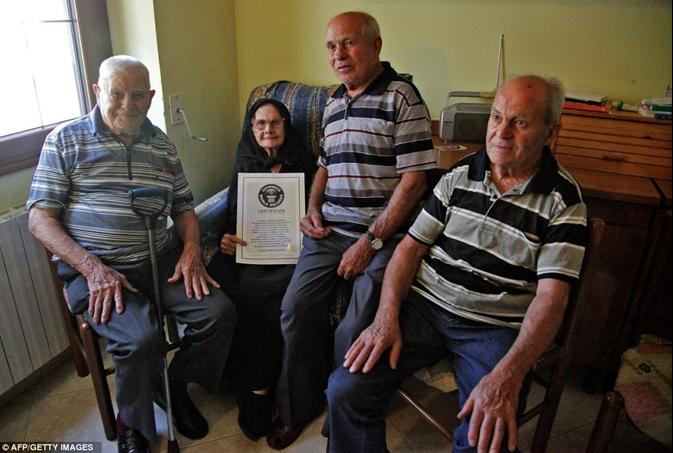 Big sister: Consolata Melis and her three brothers proudly display their World Guinness certificate in her home in the village of Perdasdefogu on the island of Sardinia
The family’s place in the Book of Records came after a family friend put forward them forward to Guinness World Records who spent seven years verifying the claim after a world-wide review had to take place and both certificates and family records had to be dug up.

The extraordinary longevity of the Melis siblings and other Sardinians has been put down to good genes, a healthy diet and a stress-free lifestyle.

‘My grandchildren have washing machines, dish washers and vacuum cleaners, and when I hear them say, "I am stressed", I don’t understand,’ Consolata Melis told Italian newspaper Corriere della Sera

Luca Deiana, a professor of clinical biochemistry at the University of Sassari in Sardinia who has studied some 2,500 centenarians on the island since 1996, said the longevity of local inhabitants was due to various factors.

‘On the one hand it is about genetics, about inherited longevity, but there is also the bounty of the land and the local fruit, particularly pears and prunes,’ he told Corriere della Sera.

It’s official: Consilata Melis holds the Guinness World Records certificate which states that their combined age of 818 years and 205 days makes them the oldest living siblings

Next news: Housing prices in Sanya start to pick up this week