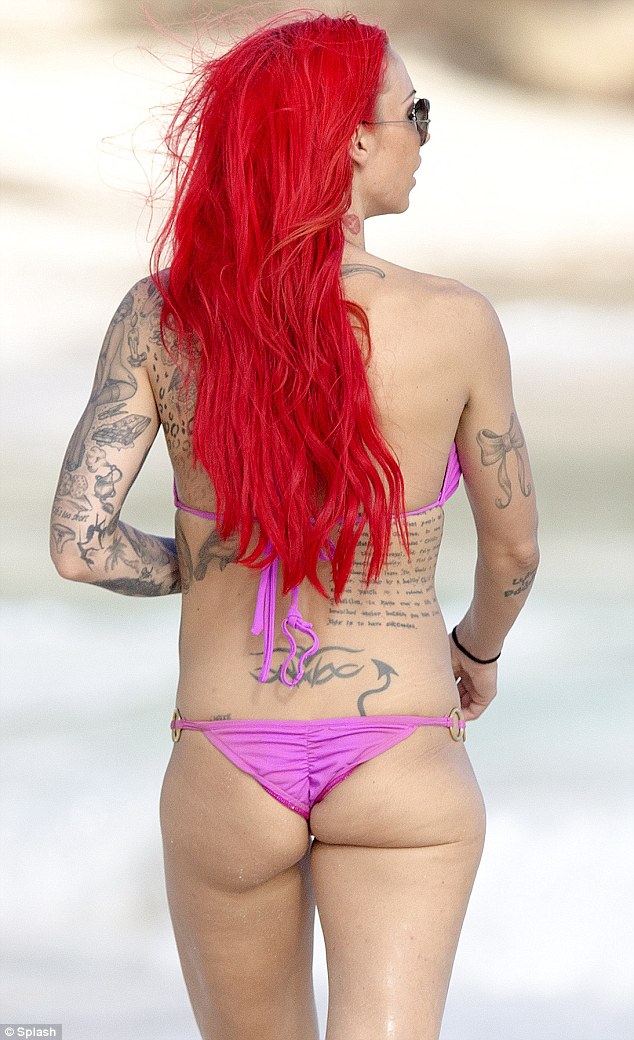 Jodie also posted this picture of herself relaxing on the beach
She’s currently dating Kirk Norcross and Jodie Marsh is happy to show off the bikini body which attracted him.

The former glamour model turned body-builder is holidaying without the former TOWIE hunk in the Caribbean and she made sure all eyes were on her as she showed off her tattoo covered figure in a hot pink bikini.

Jodie’s impressive cleavage struggled to be contained by her tiny bikini, which features gold ring details around the halter neck and the bottoms.

Her many tattoos including those on her arms, stomach, legs and back were visible as she walked along the golden side.

The pink swimwear clashed with Jodie’s identifiable dyed red hair but she didn’t seem to mind as she strolled along.

Jodie was also joined by an unidentified female pal as she enjoyed the sunshine.

The bodybuilder’s rippling muscles stood out among the other holidaymakers.

While Kirk hasn’t joined her, Jodie has joked that she is enjoying herself so much she doubts she will return to the UK from her sunshine filled paradise.

She tweeted yesterday ‘It’s true. I’ve left the UK. And where I am right now, I may never come home 😉 can someone fed ex my dogs to the carribean please. Haha x

‘I’m buying a jet ski and gonna rent it out for a living. Someone tell my mum I’m not coming home 😉 x’

She added ‘I discovered I scream the same way whether I’m about to be devoured by a great white shark or if a piece of seaweed touches my foot…. :-)’

Jodie later covered up by putting on a pair of black and white shorts as she had what looked like a cup of tea on the sand.

She also tweeted some pictures of her bum, saying ‘Doing squats & lunges gets you a big round booty. Yeah! J-Lo I’m coming for your crown x x’

However, Jodie will surely return to the UK to see Kirk – who at 24 is nine years her junior – after they recently gave their gushing first interview as a couple.

Jodie told Reveal magazine: ‘I’ve had a lot of bad experiences with men who turned out to be weirdos.

So last year something switched in my brain and I just decided to save myself for someone special.’

When asked if nightclub manager Kirk could be that ‘someone special’, she replied: ‘I think he could be. But I honestly don’t know. I’ve been celibate for so long that I feel like a virgin again. And I’m a bit scared of sex now. I’m scared of giving myself to someone.’

Kirk joked: ‘I can’t even say we’re friends with benefits because I’m not getting the benefits.’

When Kirk asks Jodie during the interview when they will be able to sleep together, she replied: ‘I want you to say you love me, that you want to marry me and have babies…’

The couple have been acquainted for years as Jodie used to be a regular of Kirk’s father Mick’s Sugar Hut nightclub in Brentwood.

But they got back in contact when she made a guest appearance on Celebrity Big Brother earlier this year – which featured Kirk as a housemate.

And it appears the couple have been dating since they both appeared on Big Brother’s Bit On The Side on July 3.

They ended up having a hot date at Jodie’s house two days later, which they live tweeted with a selection of photos.

Jodie said: ‘Right nobody disturb us. Me and @kirk_official are having a spooning session on the sofa with a film. We’re too tired to go out.’

Kirk then added: ‘Having a spooning session with @JodieMarsh watching a film! #MmmmNice did someone say #50ShadesOfKirk ;-).’

After warning he was ‘moving in for the kill’, Jodie then posted a photo of them actually kissing.
Jodie boasted: ‘Snogs 🙂 first kiss I’ve had in about a year. Yikes. Was very nice actually. He’s good.’