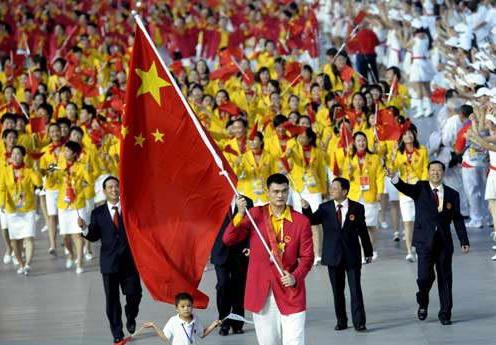 Chinese Olympic delegation at the opening ceremony in Beijing 2008 Olympics (file photo)
China’s table-topping gold medal haul at the Beijing Olympics cemented its claim as a sporting superpower but the red-clad army of 396 athletes march into London with little swagger as they renew their battle for supremacy with the United States.

China swelled with pride as their 51 titles at Beijing put the U.S. tally of 36 in the shade, dethroning their powerful rivals who had reigned supreme since the collapse of the Soviet Union.

The stunning harvest was seen as an inexorable shift in the sporting landscape, with China smashing the duopoly of the U.S. and the Soviet Union/Russia that had topped the table at every Games since World War Two.

Top sports officials in the Communist Party-ruled country, however, have been at pains to emphasise the fragility of the new world order.

"Everyone knows that we were the hosts of the Beijing Games," deputy chef de mission Xiao Tian told reporters at a team briefing on Wednesday.

"We’re not the hosts at these Olympics. Besides, we did an analysis that host countries from one Games have a decrease in their medal tally by about 30-32 percent at the next.

"I think for the team to have the same kind of success in London as they did in Beijing in terms of golds and medals overall would be extremely difficult."

Sports minister Liu Peng, and a parade of other leading officials, made similar proclamations in the lead-up to Beijing in a determined, if fruitless, drive to ease the pressure on their athletes and hose down public expectations.

Those expectations are unlikely to figure nearly as much in London and, whereas Chinese athletes rode a tidal wave of emotion to glory in Beijing, they can expect crowds to be far less enthused about their dominance in certain events.

SWEEP
That China will reign in its traditional strengths like table tennis, diving and badminton is virtually a given.
The country’s decades-old Soviet-style sports system, which has young boys and girls sacrifice their childhoods to train in the service of the state, has proved adept at producing champions in highly technical sports that reward constant repetition in training.

China’s peerless badminton team, one of the most successful products of state-led planning, has already shown their imperviousness to London crowds by sweeping all the world titles at the Wembley Arena last year, and can be expected to do so again in the Olympic tournament.

Further sweeps of diving’s eight titles and table tennis’s four, both very real prospects, would give the Chinese a head-start of 17 gold medals, notwithstanding a near-certain parade of champions in shooting, weightlifting, gymnastics and boxing.

China’s failure to reap major success in more prestigious sports like swimming and athletics has long been a bugbear for the country’s officials, however.

"In some high-profile events which are dominated by Western countries, we have to try to make some breakthroughs and stun the world," Liu said.

China’s much-touted "Project 119" – a scheme aimed at widening their medal-winning sports – yielded notable breakthroughs in boxing and wrestling at Beijing, but was largely a flop on the track and in the pool.

China is determined to amend that in London and leave with more than the solitary gold medal gleaned from Beijing’s swimming and athletics events.

REDEMPTION
All eyes will be trained on Liu Xiang and his bid for a second 100 metres hurdles gold medal after his title defence at Beijing ended with an Achilles injury and a tortured limp out of the "Birds Nest" stadium before his opening heat.

Many Chinese felt robbed of a crowning moment by Liu’s withdrawal and pressure is back on the 29-year-old to deliver the ultimate redemption story at Olympic Park, especially after his scintillating 12.87 second win at the Prefontaine Classic in Oregon last month.

Liu famously celebrated his Athens triumph, the first Olympic track gold won by a Chinese man, by remarking that the "yellow man can sprint", and over at the Aquatics Centre, coaches will look to 1,500 metres world record holder Sun Yang to mark himself as another Olympic trailblazer.

Ye Shiwen, who became China’s youngest swimming world champion when she won the 200m individual medley at the age of 15 in Shanghai last year, should also bolster her team’s medal haul in the pool, while Zhao Jing and Jiao Liuyang have claims in the 100 backstroke and 200 butterfly respectively.

China’s Li Na became the first tennis player from an Asian nation to win a grand slam title when she won the French Open last year and will hope to become her country’s first Olympic singles gold medallist.

In a country where sport and politics are inextricably linked, many of China’s London-bound athletes have been ceremoniously handed Communist Party memberships in the leadup to bring Olympic glory to the homeland.

Were that not motivation enough, they have also been offered eye-watering sums of cash, up to 1 million yuan ($156,900) in some cases, for every gold they can deliver their home towns and provinces – incentives that might leave many athletes from the capitalist West green with envy.

Next news: Largest high-end business complex to be built in Danzhou, Western Hainan