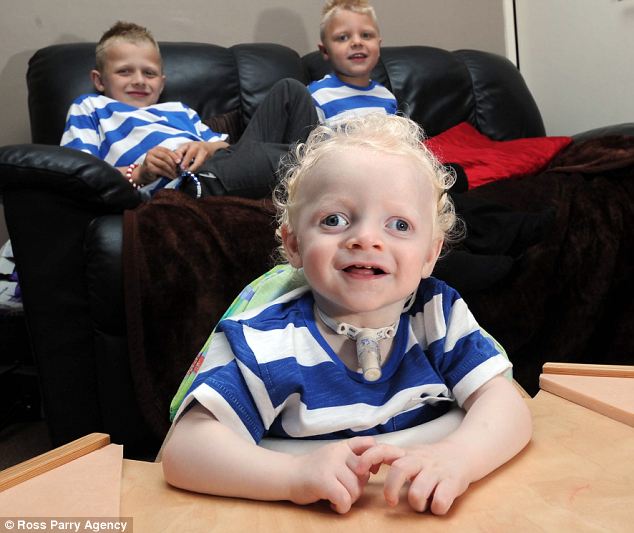 Rio Vicary suffers from Angelman Syndrome which means he is unlikely to ever walk or talk and needs very little sleep. His brothers don’t have the genetic condition

Rio pictured with his mother Gemma and brothers Cody (left) and Jaydyn. They all make sure his feeding tube remains clear
A one-year-old who suffers from a rare genetic illness that means he barely ever sleeps still manages a big grin every day for his parents.

Curly-haired Rio Vicary suffers from Angleman’s Syndrome, a rare condition which means he is unlikely to walk or talk and needs round the clock care.

The brave tot was diagnosed when he was just two weeks old and has spent most of his life in hospital where he is monitored by a dozen consultants. Rio is also albino which has left him blind but despite that he loves the light and enjoys music.

Now his parents Gemma and Wayne are creating a sensory room for him at their home in Halfway, Sheffield, so he can spend more time with the couple and their other sons Cody, seven and Jayden, aged four.

Rio is getting specialist care at Sheffield Children’s Hospital where he has spent most of his short life since the illness was diagnosed. Support from health services has been crucial for the family.

Gemma said: ‘Because Rio doesn’t sleep and wants to play round the clock we get three nights respite a week. Without that I don’t think I would be able to cope.’

Rio is now fitted with a tracheostomy – a tube inserted into his neck – for feeding time. It followed a terrifying incident when Gemma, 27, had to take quick action to save her son’s life after he started choking.

She said: ‘He was drowning in his milk and I was on my own feeding him.He turned blue and I dialled 999 for help.

‘I pumped hard on his ribs but he didn’t make a sound, then I did it again and a noise came from his chest.He was breathing again by the time the ambulance arrived.’

Gemma, who is the primary carer, has to make sure Rio’s tube is clear of fluids at all times. Her other two boys, who don’t have the condition, also help.

She said: ‘The tube is a life-saving thing. He is coughing all the time and he needs suction from me with the tube but he should be having it out soon and then we’ll hear him for the first time.

‘Rio will be able to make sounds but he will never talk, that’s just one of the symptoms of AS which also affect his intellectual development and causes massive sleep disturbances.’

She added: ‘After they did the genetic testing and diagnosed Angleman Syndrome I was relieved because at least I knew what was wrong with him.

‘Because of the combination of illnesses he has we have found only one other person in the world to match the same conditions, a year old girl in America.

‘We just pray that one day there will be a cure for AS.’

Children with AS are often known as Angels because of the syndrome’s name and their youthful happy appearance.

Gemma and Wayne, 41 are getting married in November and taking the entire family, including Rio, on a honeymoon holiday to Lanzarote.

Wayne said: ‘Last year we virtually lived apart while Rio was in hospital so we decided to get married and make it a real family affair.’

Consultant Gastroenterologist David Campbell said : ‘Rio has a lot of problems but he is a lovely little boy. His condition is very rare, it makes Rio unique.

‘But despite all his problems he is a happy little boy who can enjoy very basic pleasures like light and music which is wonderful to see.’

Previous news: Hainan Airlines, one of the SKYTRAX 5-star airlines gets awards in London