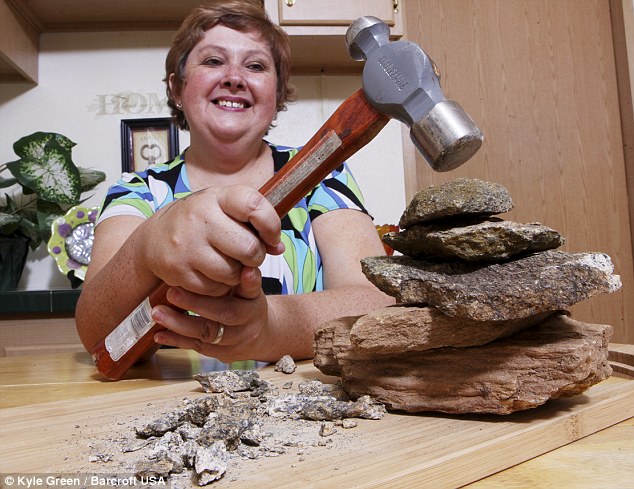 Odd diet: The mother-of-two hammers her stones down to an edible size. She eats stones to lift her spirits That’s a good one! Mrs Widener selects which stones to eat during country walks
Women around the world are known to reach for bars of chocolate in times of personal strife.

But one mother-of-two from Bedford, Virginia, gorges on stones to lift her spirits.

Care worker Teresa Widener, 45, suffers from the disease Pica – but has now revealed how love is helping her beat her astonishing habit.

She consumes 3lb of stones each week and has eaten more than 3,000lbs over her lifetime, the equivalent weight of a humpback whale.

On a bad day, Mrs Widener reaches for handfuls of pebbles and boulders she has stashed away in a special kitchen cupboard. Other Pica sufferers eat a anything from soap and sponges to lightbulbs,

She said: ‘Over the last 20 years I’ve eaten on average 3lbs of rocks each week. It fluctuates depending on how I feel.

‘If I feel down then I eat lots more because it comforts me. If I know I have some at my house I feel better, just knowing they’re there.

‘Like a comfort, they’re there for me when I’m upset.’

Mrs Widener selects softer and more brittle rocks she knows she can break up easily while out walking in the country.

She said: ‘I pick the ones I like the look of. I like the earthy flavour of them so sometimes I just suck the mud straight off them too.’

She chews the stones using the teeth on the left side of her mouth.

‘The teeth on that side have grown stronger,’ she said, ‘because I’ve been chewing rocks with them for so many years.’

But a new man in her life is helping her cut down on her odd habit.

Since marrying Jim Widener last August, Mrs Widener claims her stone consumption is on the decline.

She said: ‘Jim makes me so happy I’ve started eating less. But everyone has bad days and when I have one only rocks can make me feel better.

‘He was really shocked when he first found out I ate rocks, but he loves me for who I am and know it helps me happy if I need a boost.’

It is thought uncontrollable urges in sufferers could stem from a dietary deficiency of certain minerals.

Some creatures in the animal kingdom, such as wolves and turtles, also eat rocks to help digestion. But it is a condition rarely seen in humans.

Doctors think Mrs Widener’s need for rocks could be caused by an iron deficiency which has led to her suffering anaemia.

If the rocks she collects are too big, Mrs Widener breaks them into bite-sized pieces with a rock hammer.

She said: ‘I’ve never had any medical problems because of the rocks but I don’t go to the toilet too often and my tummy hurts a little sometimes.’

Pica is surprisingly common. Experts say as many as 21 per cent of children aged one to six can suffer it at some stage.

Pica derives from the Latin for magpie – a bird with a reputation for eating almost everything. It appeared in medical texts as far back as 1563 and is believed to be common in pregnant women.