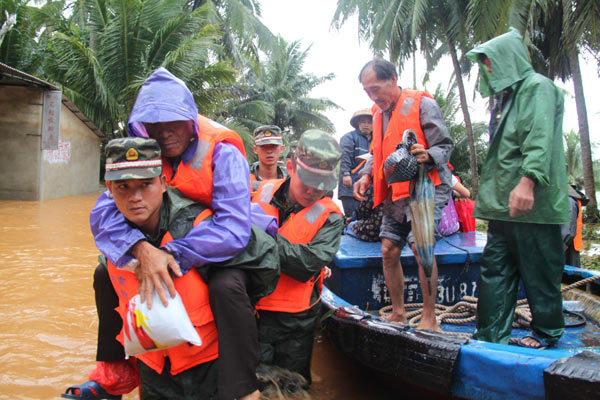 Rescuers have also been ferrying in bottled water, instant noodles and rice for the last five days, said a spokesman with the municipal Civil Affairs Bureau.

More than 20,000 people living in ground-floor residences have been relocated, since the city’s Chizhi Reservoir breached its dikes Friday morning.

Waters as deep as four meters had submerged many parts of the city and cut water and power supplies. In hard-hit Wencheng township, the road link to the outside has been cut.

Vegetable prices in Hainan have jumped by about 30 percent as local crops have been destroyed and cities like the provincial capital Haikou are relying predominantly on vegetables shipped in from outside.

Xinhua agricultural produce prices monitoring system detected price surges in many vegetables, with the biggest jump of 33 percent in the price of Chinese cabbage from Friday.

A total of 230,000 people had been displaced in Hainan, better known as a tropical beach resort, as of Saturday due to the torrential rain, which has affected more than 1.64 million people, a fifth of the provincial population, said a spokesman with the provincial disaster control headquarters.

Next news: 6,000 people evacuated after reservoir burst banks in Hainan