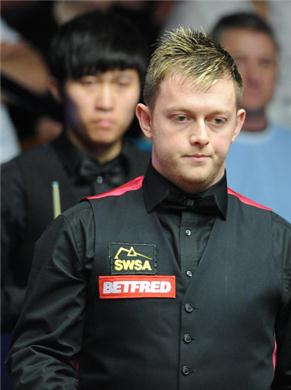 WPBSA fines Mark Allen for cheating remarks against Cao Yupeng and other Chinese players
Winner of the 2012 Haikou World Open snooker event, Northern Ireland’s Mark Allen was up against Chinese rookie, Cao Yupeng in the opening round of the 2012 World Snooker Championship at the Crucible Theatre in Sheffield. The match up did not end the way Allen expected as he was nudged down brutally by the Chinese potter and crashed out of the event by the score line of 10-6.

The Northern Irishman was not able to swallow the defeat easily at the hands of a mere Chinese rookie and accused him of cheating during the match. Allen blamed Yupeng for making a blatant push during his break in the 10th frame which, according to him, the referee even did not pick, and called him a cheat. Allen lost the game by the score line of 10-6 after he pocketed the cue ball while potting the final black in 16th frame.

After losing the game, Allen made some offensive comments on the social networking website, Twitter, saying that all Chinese potters cheat. He even mentioned the names of a couple of renowned Chinese potters. The comments were not welcomed by many snooker critics and thought that they were against the ethics.

Snooker governing body, World Professional Billiards and Snooker Association (WPBSA) took notice of his comments and launched an inquiry. After proven guilty, the WPBSA has fined the potter £10,000 along with £1,000 as the cost of hearing. The snooker governing association also suspended him for three months and warned him to be careful in the future.

The statement added, “He was fined £10,000 and ordered to pay £1,000 towards the cost of the hearing and was suspended from playing for a period of three months. This suspension will only come into effect if he commits any new breach of the WPBSA Members Rules that are dealt with by the WPBSA Disciplinary process in the next six months.”

Allen will also undergo media training as per WPBSA requirement to make sure that such behaviour is not repeated in future by any professional potter.

SOURCE: blogs.bettor.com
Editorial Message
This site contains materials from other clearly stated media sources for the purpose of discussion stimulation and content enrichment among our members only.
whatsonsanya.com does not necessarily endorse their views or the accuracy of their content. For copyright infringement issues please contact editor@whatsonsanya.com