Lance Armstrong may be stripped of 7 Tour de France titles 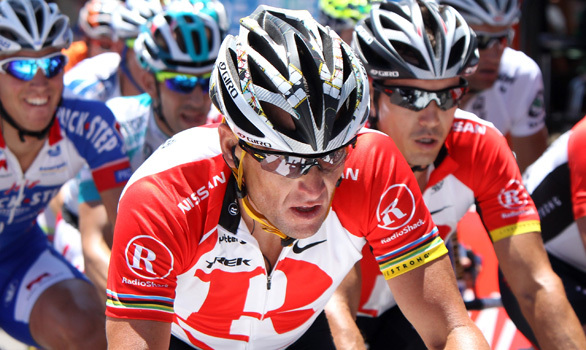 A 15-page USADA charging letter first obtained by the Washington Post made new allegations against Armstrong, contending the agency collected 2009 and 2010 blood samples from Armstrong identified as "fully consistent with blood manipulation including EPO use and/or blood transfusions."

Armstrong has not previously tested positive for such transgressions.

Travis Tygart, the head of the quasi-government agency USADA, was not available to comment. USADA has the power to suspend athletes from competition and strip them of awards but is not able to criminally charge individuals.

In a prepared written statement delivered Wednesday by Armstrong’s publicist, Armstrong said he had been notified by USADA and described it as an effort to "dredge up discredited allegations dating back more than 16 years."

"I have never doped, and, unlike many of my accusers, I have competed as an endurance athlete for 25 years with no spike in performance, passed more than 500 drug tests and never failed one," the Armstrong statement said.

"That USADA ignores this fundamental distinction and charges me instead of the admitted dopers says far more about USADA, its lack of fairness and this vendetta than it does about my guilt or innocence. Any fair consideration of these allegations has and will continue to vindicate me."

USADA’s letter, obtained by the Post and Associated Press, alleges Armstrong and five former cycling team associates, including three team doctors and team manager Johan Bruyneel, participated in a doping conspiracy from 1998 to 2011.

Armstrong and those other five face current competition bans.

According to the Post story, the letter alleges "multiple riders with firsthand knowledge" will testify Armstrong used EPO, blood transfusions, testosterone and masking agents, distributing and administering drugs to other riders from 1998 to 2005.

In a letter to USADA, Armstrong’s Washington, D.C.-based attorney, Robert D. Luskin, wrote, "It is a vendetta which has nothing to do with learning the truth and everything to do with settling a score and garnering publicity at Lance’s expense."

The USADA letter also alleges, the Post reported, that Martial Saugy, the director of an anti-doping lab in Switzerland, said Armstrong’s urine sample results from the 2001 Tour of Switzerland indicated EPO use.

An official unauthorized to speak publicly about the investigation, but familiar with its details, told The Times that USADA believes it "wouldn’t be doing its job by not moving forward on this. There are still people in the sport named in this group of six. USADA should shut down if it doesn’t go after this. It would be perpetuating a continued cover-up by not acting."

Armstrong won his most recent Tour de France title in 2005. He was scheduled to compete in the Ironman France in Nice on June 24.

In the USADA process, independent arbitrators will review evidence and ultimately conduct a live hearing probably near Armstrong’s home in Texas, calling witnesses, including the seven-time Tour champion, to the stand in a hearing that could be open to the public if the athlete wishes.