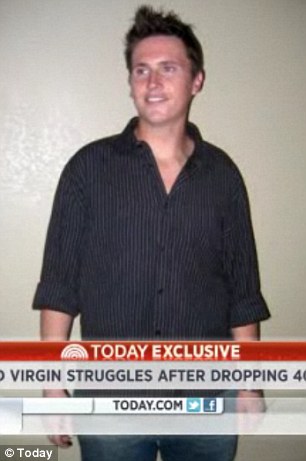 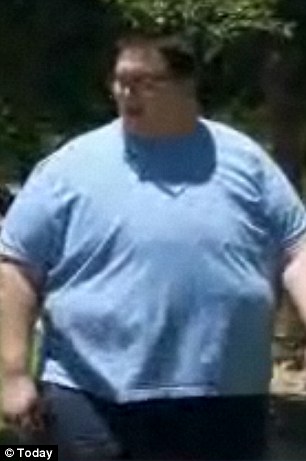 Unrecognisable: David Smith was slim and healthy after dropping 400lbs three years ago (left), but today (right) he is heavily overweight once more, having regained over 250lbs in two years
As the star of 2009 TLC show The 650lb Virgin, David Smith’s transformation to handsome personal trainer – with a doting girlfriend – made headlines.

But in a sad turn of events, the 35-year-old, from Phoenix, Arizona revealed today that he is once again morbidly obese, having re-gained over 250 of the 400lbs he lost.

In an interview this morning, he admitted that by putting on weight at this rate, his life was at risk.

He told the Today show: ‘I’ve gained more than 250lbs in two years, and with all that extra weight so quickly added to my body, I don’t know how I’m still living right now… The way I’m going, I’m not going to live for too much longer.’

Morbidly obese: David looks almost as he did in 2003 (pictured), before his weight-loss journey was filmed for a TLC documentary titled The 650lb Virgin
He added that he could already feel his health deteriorating.

David revealed that his slide back into an unhealthy lifestyle was because he could not come to terms with this newly-slim self, and though he had been outwardly thriving, he was struggling within.

‘I wasn’t doing too well. I looked really good on the outside, but inside I was a terrible mess,’ he said.

Difficult journey: David struggled with the multiple surgeries that had failed to entirely remove the excess skin on his body, leaving him scarred and disappointed with his appearance
‘All my life I was this monster in my head and all of a sudden, to be this good looking guy, it blew my mind away. I didn’t know how to deal with it.’

He was also troubled by the multiple surgeries that had failed to entirely remove the excess skin on his body, leaving him scarred and disappointed with his appearance.

David turned to alcohol and drugs for a brief time, but eventually found solace in food, the old demon that had caused his weight to spiral out of control the first time.

‘I’d eat in my car before I’d get home, or if everybody was out I’d eat something really quick then throw it away before they’d come home,’ he admitted.

‘It was tough. A lot of people were counting on me to be inspiring, and I didn’t want to let anybody down, but I just felt so bad. I didn’t know how to cope.’

The side-effects of his ballooning weight were multiple. Embarrassed by his failure to keep in shape, David became withdrawn. He lost his job, and his friendship with his own trainer suffered. Terrified that he would also lose girlfriend Megan, he admitted that he even contemplated suicide.

Breaking down as he spoke of his girlfriend, he said: ‘Her support means the world to me. I love her so much, and I know I put her through a lot. She’s stayed by my side through everything.’

But Megan insists she is going nowhere, and has even inspired her boyfriend to start hitting the gym once more to try and lose the weight.

She told the show: ‘He’s really finally ready for it this time, of course I’m going to be there. This is the moment I’ve been waiting for since he started gaining. For him to really want to be healthy again.’

David, under no illusions about the challenge ahead, agrees that the time is right to start again.

‘As much as you’ve worked on the outside, you have to work on the inside,’ he explained. ‘And if your foundation isn’t built up, you’re just going to crumble down. And unfortunately I fell down, but I know I can climb back up.’

Next news: Haikou to release PM2.5 monitoring data by end of 2012