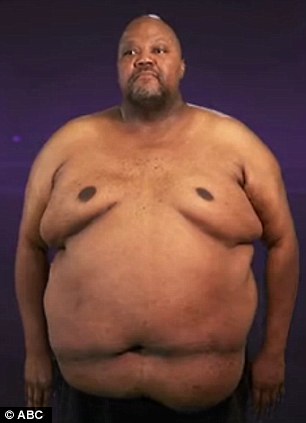 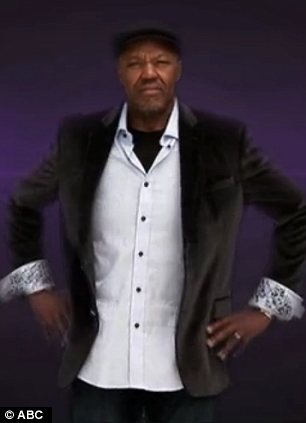 Transformation: Tony successfully went from 398lbs (left) to a streamlined 198lbs (right) on last night’s Extreme Makeover: Weight Loss Edition – despite a series of traumatic emotional setbacks
The remarkable story of how a man overcame the combined trauma of the death of his son, the breakdown of his relationship and homelessness to lose 200lbs, launched the latest season of Extreme Makeover: Weight Loss Edition.
The emotional episode, which aired last night, follows Tony, 49, who at 398lbs was morbidly obese due to a 30-year career in the fast food industry.

He describes how his weight spiralled out of control as a teen when he overate frequently because he never knew where his next meal would come from. The stress of the birth of a severely handicapped son at 21 saw him seek further comfort in food.

Tragically, it is during his very first workout with host and mentor Chris Powell that Tony learns son Marcus, after 28 years with cerebral palsy, may not live much longer.

But though he breaks down as he takes in the devastating news, he refuses to be swayed from his goal and continues undeterred with his new regime.

Tony’s challenges do not end there. His efforts to lose weight spark rows with his fiancée Leslie, who cannot embrace his new healthy-living lifestyle.

168 days into the year-long regime, the couple decide to go their separate ways. The split leaves him homeless and he ends up sleeping in his car until he finds a new place to live. It is a low point and the weight-loss slows. 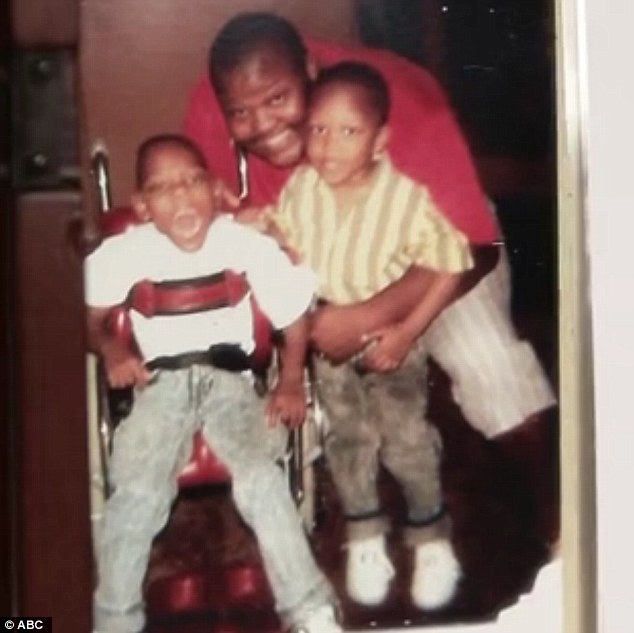 Larger-than-life: A family photo shows Tony as a younger man with sons Marcus (left) and Tony Jr (right)
Some weeks on, the situation worsens still when Marcus finally passes away, and Tony must bury his son. In a silver lining though, the funeral provides a reunion with his other son, Tony Junior, who is stunned to learn that his father has been homeless.

But where others in his position might have sought comfort in junk food, or slipped into a deep depression, Tony’s dogged refusal to give up is nothing short of inspirational.

At his nine-month weigh-in, our man is back on track, weighing in at 226lbs. The show awards him with a cash prize for getting so far, which provides him with the means to rent a home again.

Luckily for Tony, the journey documented on the show ends on a high. Not only does he successfully reach his weight-loss goal of 200lbs, he also finds a new love, Deanna, who he proposes to at the end of the episode.

Since the taping, he has kept his weight down too. In a follow-up interview he reveals that though he continues to work in the food industry, he has not touched fast food in two years.

He is even working on a cookbook of the low-calorie recipes he credits with helping him drop the weight.

‘My favourite is the low-fat mac’n’cheese. But to get that,’ he quips, ‘you have to buy the book!’

Chris could not be more proud of Tony, as he reveals in a video message.

‘I gotta tell you it was such a privilege working with you last year,’ he says. ‘You brought so much enthusiasm and vigour… you’re proof that it’s never too late to start over.’

Tony, in turn, is full of praise for Chris, who he credits with helping him achieve what he thought was impossible.

‘I never had guys in my life who cared about me, and for Chris to step up the way he did for me is just amazing,’ he says.

‘I’m just so indebted to him for the rest of my life. I didn’t think I could ever get this weight off me.’