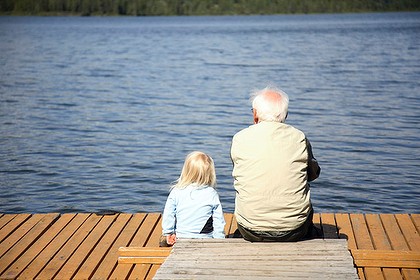 Olfactory facts … a new study shows that older people have a different but less intense smell than younger people. Photo: Thinkstock
Don’t turn up your noses – there really is such a thing as an ”old person’s smell”.

But new research shows that it is not as bad a smell as we think.

American and Swedish scientists say humans can sniff out the difference between an elderly person’s and a younger person’s body odour.

Advertisement: Story continues below Contrary to what most people may think, older people actually put out a less intense odour than their younger counterparts.

The study is the first of its kind to assess the human ability to distinguish someone’s age via their smell.

Scientists led by Johan Lundstro¨m, of the University of Pennsylvania, collected odour samples from 41 people.

To gather the sample scents, scientists used underarm pads that the participants slept with for five nights.

The pads were sewn into shirts that had been washed with an odourless detergent.

Before going to bed each night, participants showered with odourless shampoo and soap and during the day they sealed their special shirts in plastic bags to prevent smell contamination.

They were also told to abstain from alcohol, smoking and eating spicy food.

Once the pads were collected, a different group of 41 people were each given two sample odours and had to guess which one belonged to an older person.

Odours were also rated on a scale ranging from ”extremely unpleasant” to ”extremely pleasant”.

The results clearly showed that the old-age group of odours were rated as less intense and less unpleasant when compared to the younger and middle-aged samples.

The researchers also found that people were much more likely to accurately pick the smell of the 75- to 95-year-old.

”This was surprising, given the popular conception of old age odour as disagreeable. However, it is possible that other sources of odour, such as skin and breath, may have different qualities,” Dr Lundstro¨m said.

The disagreeable smell is commonly referred to as ”the nursing home smell” or ”old people smell”.

Researchers said they could ”only speculate” about the potential biological mechanism involved in distinguishing the ”old person smell”. They suggested a particular type of white-blood cell, known as a polymorphonuclear leukocyte, which indicates ageing in humans, could be involved.

”Further experimental work is clearly warranted to determine the mechanism and function of body odour-dependent age discrimination,” they wrote.

The study will be published in the journal PLoS One today and is based on previous results showing similar trends in animals.

Next news: Earnings of Hainan Airlines down by 35.7% in Q1 amid fuel prices hike