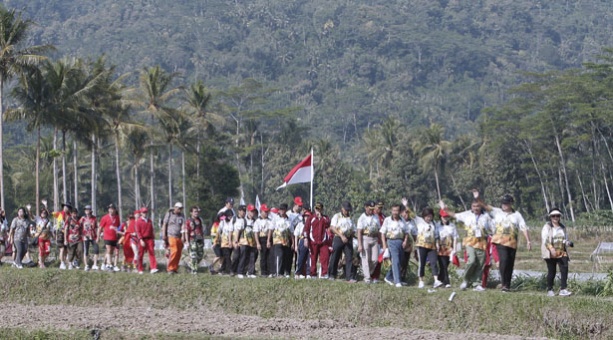 The track set in the event called Borobudur Interhash Run 2012 made them to run across bushes, path ways between paddy fields and steep terrains in the hilly areas located around the active volcano of Merapi in Magelang, Central java.

"This is incredible. The air is so fresh and a bit breezy. The track is a bit tough for me, but it’s worth it. I did not feel that exhausted as I can see very nice scenery in my running," David Smith, an Australian who had participated in the run event twice said when he ran on steep terrain in Dadapan village, Ketep Magelang on Saturday.

The route itself is located around the active volcano that erupted in late 2010. The area has been a tourist destination that provides beautiful scenery and landscape with its hilly terrain that allows people to see cities in the province from the highland from afar. Four routes comprising 4, 8, 12 and 30 kilometers have been prepared for the runners to run.

The other track location was prepared in rural areas around Borobudur temple, a historical site that has been declared one of the world’s heritages. The site is the world’s largest Buddhist temple, built in the 9th century by an ancient Javanese kingdom.

"It’s nice here, I like the track, people were smiling and greeted me while I am running, lightens me up to reach the finish, "Mark Baker, a runner from New Zealand said with sweats wetting his outfit.

David and Mark were among 4,800 foreign runners joining in cross country running enthusiasts organization Interhash that was founded in 1978. The organization has been conducting massive recreational run events once every two years in several locations in the world.

For locals living around the running tracks, the event was a brand new phenomenon as it involved plenty of people running in their neighborhoods. "I am glad to see them. I had never see westerners this much. They run in casual way. Sometimes they walk and greet people watching their run and yelled strange words that made us laugh," Sugianto, a farmer living in the village said.

Indonesia hosted the Interhash run event twice respectively in Jakarta in 1982 and in Bali in 1988. According to the retired general Suyono from Indonesian Interhash organization, Indonesia has at least 10,000 members that spread across the country.

Different from the previous events, this year the central and Central Java regional governments were actively taking part in organizing the event. The event was highly expected to earmark the making of new popular tourist destination in Central Java province.

To promote tourism in the province, Indonesian President Susilo Bambang Yudhoyono took part in the Inrerhash run, accompanied by senior officials in his cabinet.

"I hope that the conduction of Interhash run would not promote Borobudur, but also make other destinations in the country popular as well," the president said after concluding his run around the majestic Buddhist temple of Borobudur on Saturday.

The conduction of the event participated by massive number of people gives benefit to tourism industry in the hosting area as it requires plenty of hotel rooms and other accommodations that may add earnings of people involved in tourism business.

Three locations have been proposed to host the event in the next two years. Those locations were Hainan in China, Brussels in Belgium and Fiji. The final decision on which location preferred by the Interhash members would be decided through voting mechanism.

Next news: Arcade buildings in Haikou to open to the public by the year’s end