Derya Sert, who was born without a womb, received a healthy organ in a seven-hour operation.

Scans show her new womb, which came from a woman who had died in a car crash, to be healthy and working well.

Mrs Sert is due to start IVF treatment in Turkey in September in the hope of conceiving a longed-for child.

With Swedish doctors due to start transplants in which a mother donates her womb to her daughter this autumn and British surgeons also close to performing their first operation, many more women could soon have the chance of carrying their own child.

In Britain alone, there are at least 15,000 young women who were born without a womb or have had it removed due to cancer or another illness. Mrs Sert, 22, said: ‘People ask me now if I want a boy or a girl, but it doesn’t make any difference to me, I just want a child a healthy baby.

‘If I had a magic wand, I would want to be pregnant now. I just want to hold my baby in my arms, to be a mother.’

Her surgeon, who believes womb transplants will become common in the future, said that some women’s desire to be pregnant is so overwhelming that they would take any risk – even death – to have a child.

But fertility expert Lord Winston said the risks are too great and that some women should accept that they won’t have a child. ‘There are some people who are not going to have a child and sad though that is, that has to be seen,’ he said.

Risks range from rejection of the new womb, to potentially fatal complications of pregnancy. Any baby will have to be delivered by caesarean section and the drugs needed to prevent the womb being rejected can raise the risk of cancer and trigger illnesses such as diabetes.

Womb transplants have been carried out successfully in animals including mice, rats and sheep, who then went on to have offspring.

The operation has been done on a woman once before, in Saudi Arabia in 2000.

But the donated womb, taken from a living donor, withered after three months because the blood vessels used to connect it were too narrow and became blocked by clots.

In August last year, Mrs Sert became the first woman in the world to receive a womb from a dead donor.

Using a dead donor allowed her doctors at Akdeniz University Hospital in the Turkish city of Antalya to remove the extra tissue and large blood vessels needed to give the womb a reliable blood supply.

Like one in every 5,000 women, Mrs Sert, a housewife married to a car mechanic, was born without a womb. She had never had periods, but her ovaries were healthy and she could produce eggs.

Raised in Anamur, a traditional, conservative town in the country’s southern tip, the farmer’s daughter found it difficult to come to terms with the fact that she would never become pregnant and appealed to doctors for help.

Mrs Sert spent six months in hospital and was given powerful immunosuppressant drugs to stop her body rejecting the new womb.

Her periods started three weeks after the operation, a signal that the new womb is working well. Scans show its lining to be healthy. The true test of success will come in September, when up to two of the eight embryos created from Mrs Sert’s eggs and her husband’s sperm, and frozen ahead of the transplant, will be inserted into her womb. 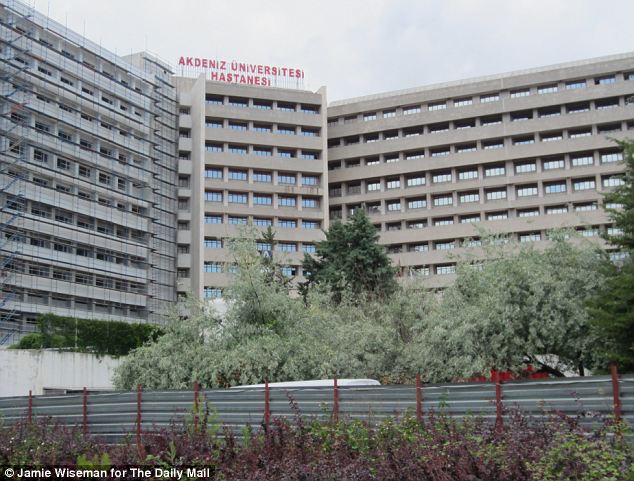 Groundbreaking: Akdeniz University Hospital in Antalya where Dr Omer Ozkan treated Mrs Sert. She spent six months in hospital following the operation and was treated with powerful immunosuppresant drugs
Mrs Sert said: ‘We could be so happy if I could be a hope for other women. I wish for them to have the baby they long for.’ Her husband Mustafa, 35, said: ‘If the baby is a boy, we will name him after our doctor.’

Dr Ozkan, who has just carried out a full face transplant, has been contacted by women from all over the world, including some Britons, desperate to have womb transplants.

But he does not plan to do another of the operations until he has seen if Mrs Sert is able to have a healthy baby.

He said: ‘This is the first successful womb transplant but the most difficult stage still lies ahead – learning if the patient can become pregnant and have a baby.’

In Sweden, surgeons at the University of Gothenburg have been given the go-ahead to carry out living transplants in which a mother gives her womb to her daughter.

And here, Richard Smith, a consultant gynaecological surgeon at Imperial College London, could be ready to operate on British women, using wombs from dead donors, in two to three years. More than 50 potential patients have already come forward.

Mr Smith, who is launching the charity Uterine Transplant UK to raise the £500,000 needed for the first five womb transplants on British women, said: ‘In many women, there is a deep yearning to carry children and this is not fulfilled by surrogacy. I know in my heart of hearts that if we can do it safely, it is right.’

Josephine Quintavalle, of campaign group Comment on Reproductive Ethics, called the procedure ‘a desperate solution to a desperate problem’.