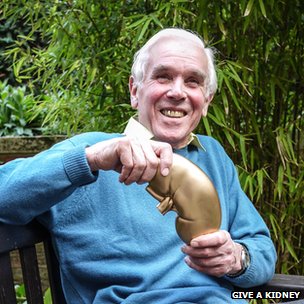 Nicholas Crace was told he had the kidneys of a 40-year-old.
An 83-year-old man has become the oldest person in the UK to donate a kidney while still being alive, the NHS Blood and Transplant service has said.

Nicholas Crace, from Overton in Hampshire, is also the oldest "altruistic" kidney donor – he will never meet the recipient of his organ.

He said: "It’s nice to feel in old age that one can still be useful."

His surgeon said a kidney from a live donor "performs better, works quicker and lasts longer".

Mr Crace, who enjoys visiting friends, gardening and volunteering, made the decision to donate last year in the months after his wife, Brigid, died.

He said he was no longer able to donate blood after turning 70 and when he looked at donating bone marrow he found out he needed to be under 40.

However, there was no age limit for kidneys, even "from somebody as ancient as me", he said.

He said he was struck by the plight of people waiting for a kidney.

"Apart from going to hospital four times a week, they have a very restricted diet and can’t travel so they live a pretty miserable life and it’s so easy to make that life more agreeable simply by giving them a kidney."

There were more than a dozen visits to hospital, to check he was fit enough for the surgery and that his kidneys were up to scratch, before the transplant was allowed to go ahead.

As for his other organs, he said: "They can take the rest when I’m dead."

Quality
Sam Dutta, the surgeon who performed the operation at the Queen Alexandra Hospital, in Portsmouth, said: "A living donor kidney performs better, works quicker and lasts longer than one from a deceased donor.

"All the detrimental factors related to being on dialysis are completely taken care of by a good functioning kidney.

"An altruistic donor coming forward is an amazing thing for us, the recipient just gets a new lease of life."

It used to be the case that "living donations" could only take place between between family members or life-long friends. But the rules were changed to mean "altruistic donation" could take place if people were motivated by a desire to help others.

NHS Blood and Transplant’s lead nurse for living donation, Lisa Burnapp, said: "Mr Crace’s example shows that people of all ages can potentially save and dramatically improve the lives of complete strangers by donating a kidney.

"One in three of all organ transplants in the UK is now from a living donor and living kidney donation currently helps to transform around three patients’ lives every day."

"They have the imagination to understand the suffering that people go through on dialysis while waiting for a transplant and the courage and generosity to do something about it."

SOURCE: BBC
Editorial Message
This site contains materials from other clearly stated media sources for the purpose of discussion stimulation and content enrichment among our members only.
whatsonsanya.com does not necessarily endorse their views or the accuracy of their content. For copyright infringement issues please contact editor@whatsonsanya.com