Updated: 2012-05-02 00:00:00
Two brothers have developed an age-reversing disease, which has abruptly halted their adulthood and instead leaves them behaving like young children.

Matthew, 39, and Michael Clark, 42, both had jobs and were able to have normal relationships until their mannerisms became more and more childlike – just like in the film the Curious Case of Benjamin Button.

They have now been forced to move back home with their parents in Lincoln and ex-RAF regiment Michael is now estimated to have a mental age of 10 and is said to giggle constantly. Rare disease: Matthew, right, 39, and Michael Clark, 42, now spend their days living at home with their parents and playing with toys as their mental age continues to regress
While factory worker Matthew, whose 19-year-old daughter Lydia is expecting a baby, behaves much like a toddler.

After their behaviour started to change, the brothers were eventually diagnosed with terminal leukodystrophy last year.

The condition usually only affects newborns, and is so rare there are only 100 people affected in the whole of the UK. 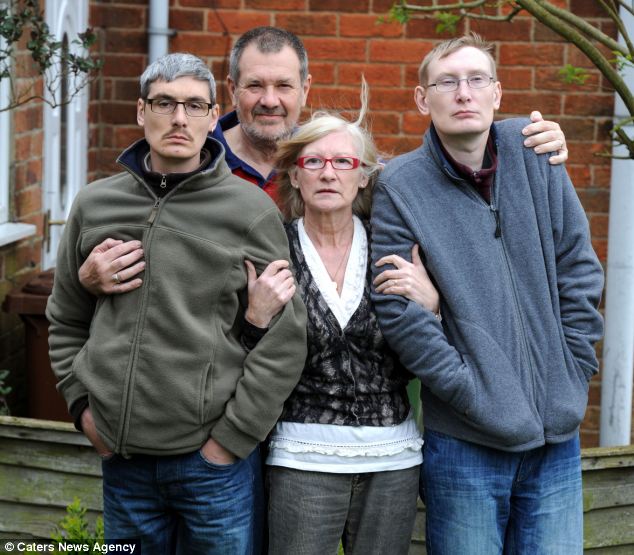 Tragic: Anthony and Christine Clark, with their sons Matthew (left), and Michael, at their home in Lincoln. The brothers were only diagnosed with terminal leukodystophy last year
Leukodystrophy is a neurological disease which affects the brain, nervous system and the spinal cord.

Their form of the disease mirrors the plot of the film The Curious Case of Benjamin Button, based on the F. Scott Fitzgerald novel, in which an old man constantly gets younger, rather than growing old – although the brothers physical appearance is not changing.

The brothers’ devastated parents Anthony, 63, and Christine Clark, 61, told how they had to abandon their dream retirement in Benidorm to come back to Lincoln and look after their sons.

Anthony said an average day for the family now consisted of entertaining is adult boys with board games, cartoons and comics.

He said: ‘Both the boys like cartoons, especially the Smurfs and Alice in Wonderland, and the types of films they like to watch has changed to those aimed at children.

‘Matthew loved the first Back to the Future, but he didn’t like the second and third one and like a kid if he doesn’t like it he just gets up and leaves or turns it off. 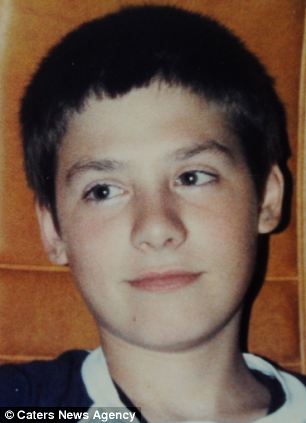 Regression: Matthew Clark, left, aged around 12 and Michael Clark on his 16th birthday – their behaviour now mirrors their childhood years
‘At the moment they really like snakes and ladders and Monopoly but other games like Cluedo we’ve bought them are proving too difficult.

‘In terms of diet they both love crisps but we have tried to improve their eating habits.’

After moving to Spain in 2007 Michael and Matthew’s parents began to notice unusual things about their sons.

Anthony usually spoke to Matthew and Michael once a week and sent a text most days to the pair.

Matthew was still in full-time employment but had split from his wife whereas Michael was not working since being medically discharged from the RAF after falling and damaging his knee.

Michael went on to qualify as a cabinet maker but today his talents are lost.

Anthony said: ‘It was little things at first, not replying to a text, or not answering their phones. But then we wouldn’t hear from them for weeks.

‘When I did finally get hold of Michael he told me he hadn’t had any credit which was odd because that wasn’t like him.’

Anthony said things came to a head when he received a phone call from his granddaughter Lydia last year.

He said: ‘She told me she had a call from someone at the YMCA about Michael asking for her dad Matthew’s details. It was then that we found out Matthew had lost his job.

‘He was so confused about what to do he had been sitting in a room with just a candle at night and no food or electricity for two weeks because he didn’t know how to claim benefits. He was as helpless as a child.’

Anthony, who worked in the prison service for 22 years, said: ‘It is a devastating disease.

‘Both of them are very childlike now. Matthew went out the other day and bought himself a train set and a Mr Potato Head. 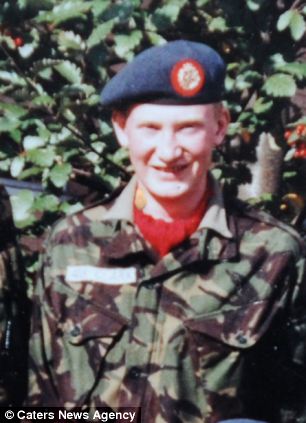 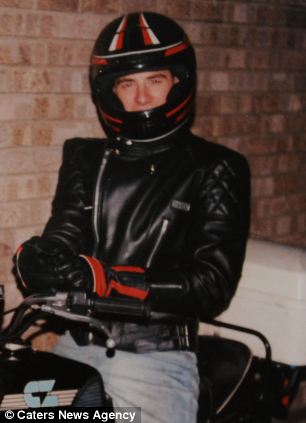 Before the disease: Ex-RAF regiment Michael, left, is now estimated to have a mental age of 10 and is said to giggle constantly, while Matthew, right was fired from his job as a factory worker after his behaviour changed
‘He also has these awful episodes where he screams and shouts and says ‘I don’t know what I’m doing’.

‘It is like an adult having a toddler’s tantrum. It’s obviously worse for him but it is terrible for us too.

‘There’s nothing we can do to help and we feel absolutely powerless.’

Mr and Mrs Clark came back to the UK in January to look after their sons who now need full time care.

Mr Clark told how the brothers’ lives began to unravel after their symptoms started to become more pronounced.

Unusual: The disease mirrors the plot of the film The Curious Case of Benjamin Button, based on the F. Scott Fitzgerald novel, in which an old man played by Brad Pitt, pictured, constantly gets younger, rather than growing old
He added: ‘Michael was evicted from his flat because he stopped looking after himself. If he dropped something it would stay there and he stopped doing the dishes.

‘Matthew was fired from his job as a factory worker, and although we don’t know the full story we can only assume it is because he was behaving like a child.’

Michael moved into Matthew’s flat after the eviction but left shortly after a row with a neighbour, believing he was being told to leave.

After sleeping in a park for three weeks he found a soup kitchen who sent him to the Salvation Army.

Mr Clark said: ‘They knew something was wrong at once and they sent him to a doctor.

‘The doctors carried out an MRI scan and they discovered the condition. When they asked him if he had any siblings he said he had a brother and they ran tests on Matthew and discovered he had the same thing.

The Myelin Project funds research into the disease in an attempt to find treatments and, ultimately, a cure for conditions such as leukodystrophy as there is little knowledge of the illness.

CEO of Myelin’s British arm, Lynda Carthy, said: ‘There is an estimated one in three billion chance of two people who carry the gene deficiency meeting and becoming partners.

‘The chances of the children developing the condition are dependant on what type of leukodystrophy the parents have. If both have the recessive gene then there is a one in four chance of the children having the disease.

‘If only the mother has the gene every boy born would have a form of leukodystrophy. Of course it’s important to say there are 37 known types of the disease at the moment but doctors are diagnosing new forms which simply have not been catalogued yet and named.’

Next news: Sanya sees tourist peak during May Day holiday