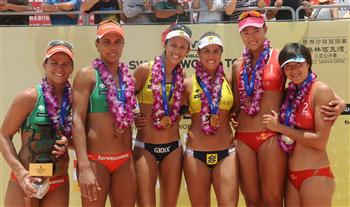 "It’s a good start for us; last season we didn’t start so well,” said Talita, who paired with Antonelli to finish as runners-up to Xue Chen/ Zhang Xi of China in the Brasilia Open last week. “This year is an important year and we’ve started with two finals – one first place, one second – so you know our staff and our team are doing a good job.”

"We are fighting a lot to win,” said Antonelli. “It was very difficult to lose in Brazil because we really wanted to win, but we are very happy here, because we like China. Me and Talita, we always do well in China. It’s a difficult trip, but I like the people; everybody is smiling. It’s incredible. The feeling is perfect. I think the very good result is because I believe in the ‘therapy’ of China.”

"If you fight a lot, if you practice a lot and you can win, that’s the best feeling you can ever have,” she added. “My partner was incredible in support.”

Talita predicted that the contest for medals at this summer’s London Olympic Games would be more difficult than in Beijing. “The London Games will be harder than Beijing. We have more good teams and everybody wants the gold medal. We have to work hard and be focused all the time,” she stated. “The Olympic Games are very important and we are looking forward to it. We will try our best and I hope that it will be a wonderful season, a wonderful year.”

Dropping the second set and trailing 6-1 in the third, Antonelli/ Talita fought back with a 13-6 run to make it 14-12. Defending champions Juliana/ Larissa, who lost to Antonelli/ Talita on Friday before winning a lower-bracket match and the semifinal against top seeds Xue/ Zhang to make the final, withstood one matchpoint, but Talita beat Juliana over the net to seal the match in 56 minutes.

"It’s so hot and it’s not easy to play,” Talita said. “Maybe they felt relaxed when leading by five points. But we never gave up; we kept trying all the time and we were more focused. That’s the most important thing.”

With their third victory in a row over Juliana/ Larissa, Antonelli/ Talita also improved their head-to-head record against their compatriots to 6-13.

"Our matches are always close; it’s always two- or three-point games,” Talita said. “Maybe now we play better towards the end of the game.”

Juliana/ Larissa, who were fourth in the season-opening Brasilia Open, settled for the silver medal, while the bronze medal went to home duo Xue/ Zhang, who won 21-16, 21-17 over Austrian 20th seeds Sara Montagnolli and Barbara Hansel. The bad news for the Beijing Olympic bronze medallists was that Xue injured ligaments in her right hand in a clash under the net with Hansel in the first set.

"We are still not sure how serious the injury is, but it seems she has a torn ligament,” said China coach Miao Zhihong. “We will send her to hospital for further checks.”

"I thought I could continue to play, so I tried my best to finish the match,” said Xue. “After the clash, it was difficult for me to do some of the moves, but it also made me calm down. It’s just the beginning of the season and I think we are in good shape, better than last year. I hope we can continue like this for the rest of the season.”

The Austrians are still fighting for a ticket to the London Olympic Games. “We are right now on the edge,” Montagnolli said. “We have to fight with other teams for points. So this result is very important and we will try to play well in Shanghai and in Beijing.”

The 2012 FIVB Beach Volleyball Swatch World Tour will continue in the next two weeks with consecutive $600,000 Grand Slams (men and women) in Shanghai and Beijing.

SOURCE: fivb.org
Editorial Message
This site contains materials from other clearly stated media sources for the purpose of discussion stimulation and content enrichment among our members only.
whatsonsanya.com does not necessarily endorse their views or the accuracy of their content. For copyright infringement issues please contact editor@whatsonsanya.com