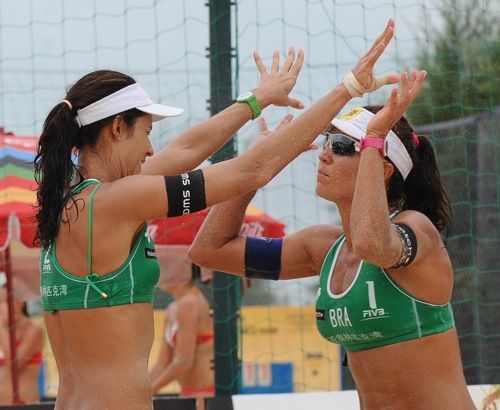 We think we learned a lot from the second match, they gave us a lot of pressure,said Zhang Xi after their fourth win in a row in Sanya. We have been improving over the last four matches, but I think there are still a lot to improve in defense and combination.

She first set was not so difficult for us, but they made some changes in the second set and we should have adjusted ourselves sooner,� Xue Chen added.

We are very pleased, but I think we are playing at the same level, Talita said after the 37-minute battle with Juliana/Larissa, always hard to play against Juliana/Larissa and it’s always very close game, I think today we are more focused.

Antonelli/Talita were very happy with their fine start into the Olympic season. We are happy, this is a very important year for us. We are in semifinals again and that’s good for our team.

Juliana/Larissa, who had beaten Xue/Zhang to claim the title of the Sanya Open in 2011, will have to play a lower bracket match on Saturday for a ticket to the top four in the double elimination tournament.

Suffering an opening loss Thursday morning, Gielen/Mouha and Bawden/Palmer and Bansley/Maloney all managed to win four in a row to keep alive their medal hopes.

We are happy with how we played today and how we came back from our loss yesterday, said Bansley, Thank for that it’s cooler today, yesterday it was pretty hot.

Upsetting Vieira/Liliane 21-19, 21-13 on Friday afternoon, Bansley and Maloney, whose previous best finish together in the FIVB Beach Volleyball SWATCH World Tour, believed they could achieve better results. We think so. We’e prepared very well in the off-season, we are playing well as a team and I think we can do better, Bansley added.

Sanya is hosting the FIVB SWATCH World Tour event for the fifth year in a row and this year’s Sanya Open is also included as a part of the Beach Volleyball Qualification Tournament for the 2012 London Olympic Games.

China will again stage three FIVB SWATCH World Tour events in 2012 and the Sanya Open will be followed by consecutive double gender Grand Slams in Shanghai and Beijing.