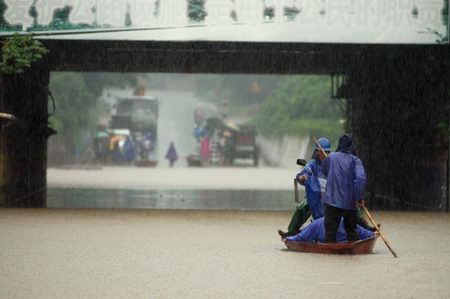 By late Thursday, more than 210,000 people had been evacuated after about 1,160 villages were submerged by floodwaters, caused by the heaviest torrential rains in Hainan since 1961.

Additionally, 111 fishing boats were damaged and another 28 had sunk off the harbor after the rains began Sept. 30, said Yang Yunxian, a provincial disaster control official.

Economic losses caused by the floods were estimated at about 1.13 billion yuan (about 169 million U.S. dollars), Yang said.

The armed police headquarters of Hainan said more than 1,500 soldiers and 45 rescue boats had been dispatched for rescue work. The Naihai rescue bureau also sent helicopters and rescue boats to search for the missing fishermen.

On Thursday, local authorities used explosives to blast a reservoir twice in the provincial capital Haikou to reduce rapidly rising water levels that threatened to collapse the dam.

However, as of 7 p.m., traffic was again moving on all the major highways that had been closed because of the floods, a spokesman for the provincial public security department said.

In southern Guangdong province, about 2,000 people were evacuated due to floods caused by heavy rains that began pounding the area Tuesday.

Next news: Sanya ranks first among 8 cities most expected to lower property prices