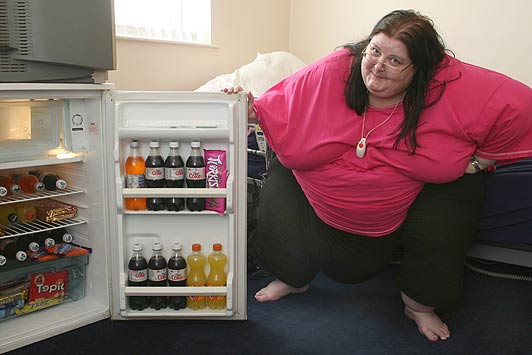 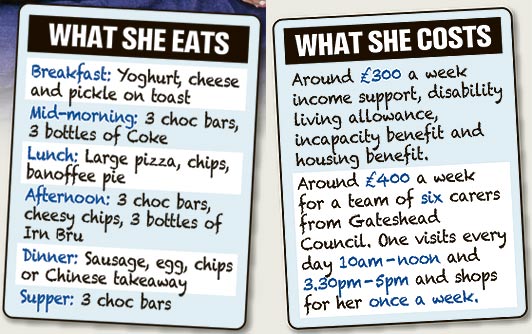 Supersized … daily diet, left, and burden on state
THE fattest woman in Britain told yesterday how she has not been out for FOUR YEARS because of her weight.
Brenda Flanagan-Davies, who is nearly 40st, spends all day in a reinforced bed listening to the radio and buying groceries online.

She eats 6,000 calories a day — three times what an average woman needs.

Her only exercise is to walk 20ft to the wet-room style shower in the bathroom — a feat that leaves her exhausted.

Doctors have given Brenda, 43, a stark choice — diet or die.

She said: "It terrifies me, but I just can’t stop. Doctors warned my weight will kill me because I’m putting so much stress on my organs.

"But food is an addiction that I can’t fight."

Brenda, who gets about £300 a week in benefits, added: "I hate this life. I feel ashamed of myself that I’m even in this position. I want to help myself but don’t know where to start."

She has been told her body is not strong enough to cope with surgery, such as fitting a stomach-shrinking gastric band.

She has already tried weight-loss drugs and spells at slimming clubs but admitted: "I can never stick to a strict diet."

Brenda — who five years ago weighed 48st — shares a bungalow with husband Ronnie Davies in Gateshead, Tyne and Wear. A care team devotes 25½ hours a week to her — costing Gateshead Council around £400. Carers help her shower, give her a "deep crease clean" to tackle the sores which develop from being in bed so much and cook and shop for her.

In between sensible meals prepared by her carers, she has chocolate bars and fizzy drinks from a fridge in her bedroom.

She met retired labourer Ronnie, 65, six years ago at a community centre day out. But she was effectively bed-bound when he proposed in 2010, so a registrar had to marry them in a special ceremony at her home.

Brenda’s last trip out was to see her GP four years ago. She said: "I struggled to get in and out of the car."

On one outing in Ronnie’s Ford Mondeo, Brenda’s weight broke the front suspension.

She recalled: "Eventually he wasn’t able to turn the steering wheel or change gear because my flab was in the way."

Brenda piled on weight after being sent to a children’s home when her mum had depression. It got worse when she was bullied at school and began comfort eating. At 18 she was 20st and a size 18. She said: "The heavier I got, the sadder I got, so I continued to eat more."

Her condition means she has barely worked — although she once had a job in a Chinese takeaway for a few months.