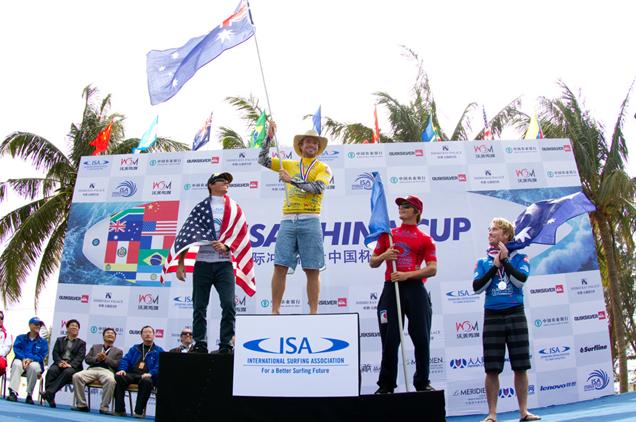 With 15 minutes to go in the final of the Open Men, Heath Joske was sitting in fourth without a single substantial score. In a matter of minutes, the ocean began sending waves his way and by the final horn he had the rest of the field needing a combination of scores to catch him.

Heath Joske leading his team to a gold medal in the ISA China Cup. Photo: Munoz/ISA
Afterward, he didn’t credit his surfing or heat strategy, his explanation was a bit more lighthearted. “I guess the ocean must have been paying me back,” said Joske, minutes after he was carried from the ocean’s edge upon the shoulders of his Australian teammates. “I picked up a bit of rubbish off the beach the other day, so maybe China’s giving me a bit of respect and payback, thanks Hainan, xie-xie China.”

With Joske’s win and teammate Nic Muscroft’s fourth-place finish, Team Australia managed to out-point Team France for the inaugural ISA China Cup title and the team gold medal. The elaborate gold trophy was presented to Muscroft, the Australian team captain, by ISA President Fernando Aguerre. With the long, lefthand wave at Riyue Bay continuing to produce rippable waves from Day 1 through the final, competitors were fully acclimated and that translated to some of the finest surfing of the four-day event.

Sofia Mulanovich, a former ASP World Champ and the 2004 ISA World Surfing Games gold medalist, was in rhythm with the waves and her board from the beginning of the day. In her early heat she recorded the highest single wave score (9.50) and total heat score (18.17) of the Open Women in route to qualifying for the final. In the 40-minute final, she locked down the win behind her powerful, multi-faceted approach for a heat score of 15.27.

Women’s gold medal winner Sofia Mulanovich from Peru. Photo: Watts/ISA
"I’m really, really happy. The waves are super fun, I’ve been hanging with my team, it’s just been an amazing week,” said Mulanovich, after being hoisted to the podium by her teammates. “Plus, I haven’t really won a contest like this in a while; I got a little sensitive and almost started crying.”

Mid-way through the men’s final, USA’s Cory Lopez was sitting in first, in control of the heat before Joske’s flurry of waves and high scores. His focus had been on France’s Marc Lacomare, who was in second at the time and needing just an average score. “I made the decision to sit near Lacomare, that was my game-plan at that point, and we all ended up going deep, leaving Heath all alone,” Lopez explained. “I used my strategy and it didn’t work. That’s how it goes sometimes.”

After the heat, Joske’s enthusiasm was intoxicating. His smile from beneath his koubra (the traditional hat the Australians wear at team events) wasn’t budging. It’d been quite a while since his last contest victory, at any level. “I was stoked when I got the call up for this event because no way in the world did I ever think I’d come to China, so I was pretty pumped to actually check out the place and see what it was all about,” he said. “To get a win in the inaugural event, an historical event – I’m stoked.”

At the closing ceremony for the ISA China Cup, President Aguerre, whose dream to develop surfing in China was being realized, was all smiles and compliments, wearing black and white checkered pants, which is typical attire for him for special occasions.

"This is the first but not the last ISA China Cup that we’re going to run in this country; next year we’re coming back to continue to make inroads to surfing in China,” he said. “To all the athletes, coaches, and organizers, like Womei Media, thank you, gracias, muito obrigado, xie, xie.”

Tomorrow, January 11, the Hainan Classic, an ASP 4-Star event with a $95,000 USD, which is being produced by the ISA as part of the International Surfing Festival, will begin and it will be broadcasted live on hainaninternationalsurfingfestival.com. Competition will begin at 8:00am local time (4:00pm PST and 7:00pm EST).

Next news: Haikou-Vietnam cruise route to be resumed with ‘Ocean Dream’ cruise liner