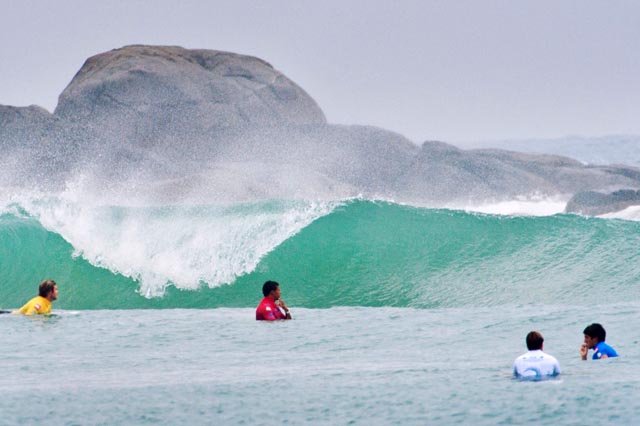 Day 1 at the ISA China Cup being held at Riyue Bay, China. Photo: Munoz/ISA
After all the grandiose pre-event theatrics, the reason eight national teams with 48 surfers traveled from every corner of the globe to China began under cloudy skies at Riyue Bay. And the level of surfing did not disappoint.

While a few National Teams saw their team trophy hopes diminished just a few heats into the event, others pronounced themselves among the favorites in the ISA China Cup, the first of two events that comprise the Hainan Wanning Riyue Bay International Surfing Festival Presented by Quiksilver.

As the morning hours passed, the beach began to fill in with locals, tourists and the occasional dignitary. Among the notable names to take in the action were He Jintao, the chairman of Womei Media, and Wang Jian, one of the most successful businessmen in the country. Though the sport was new to most of the people in attendance, photos with the surfers were taken and applause was shared.

"The people of China got to see for the first time what the ISA and all of its talented surfers can do,” said Fernando Aguerre, the president of the ISA. “I was so happy to see all of the local people on the beach. It was wonderful to share in the electric atmosphere surrounding this truly historic event.”

Using a strict power-surfing display, Team USA’s Chris Ward was one of the standouts of the day in the Open Men, winning both of his Qualifying Round heats

"Conditions have been excellent, you can fit a lot of maneuvers on this wave,” said Ward, who only surfed once before the contest began in order to rest a nagging knee injury. “It’s kind of a longer, softer Lower Trestles.”

Australian Heath Joske, another powerful surfer, put up one of the top heat scores of the day, a two-wave total of 16.74. “I felt good, felt like I was lucky to get two waves that walled up and had a bit more size,” Joske said. “The set-up for this event is incredible. The Chinese people and the organizers really haven’t held back. China is really special and really different from what I expected, it’s really beautiful and the nature’s everywhere. I’m really happy the Chinese have been such amazing hosts.”

Also sending a strong message to the opposition was ISA-newcomer Messias Felix of Brazil. The young, muscularly built surfer was all high-performance all day, launching various aerial maneuvers that had his teammates roaring and the Chinese spectators respectfully applauding.

In the Open Women, Peru’s Anali Gomez put together the type of startling performance that makes every surfer in the draw stop and take notice. With her curly brown hair bobbing behind her, Gomez accelerated along the Riyue Bay wave face and then transitioned into a tremendous layback gouge. She scored an 8.5 on the wave. “I was pretty nervous at the beginning of the heat, but when I took my first wave, I felt much more secure with myself and I was able to show what I know how to do,” said Gomez, who had the highest heat total (17.00) of the day. “I’ve been training much more this year with better trainers to get me ready to compete against better competitors.”

In a shocking upset in the final heat of the day, defending ISA World Surfing Games gold medalist Santiago Muniz of Argentina finished fourth in his repechage heat, which officially eliminated him from competition. In total, 16 men were eliminated in the first day of competition, leaving 16 to compete for the gold medal.

Tomorrow, after several more heats of competition for the ISA China Cup, the ISA Aloha Cup, a team-driven contest, will begin. Immediately after that action-packed, one-of-a-kind event, there will be a memorial paddle out for Sean Collins, the founder of Surfline.com, which is the official forecaster for the Festival. The paddle out will be broadcast live on the webcast.

ISA membership includes the surfing National Governing Bodies of 70 countries on five continents. Its headquarters are located in San Diego, California. It is presided over by Fernando Aguerre (Argentina), first elected President in 1994 in Rio de Janeiro and re-elected seven times since. The ISA´s three Vice-Presidents are Alan Atkins (AUS), Karín Sierralta (PER) and Debbie Beacham (USA).