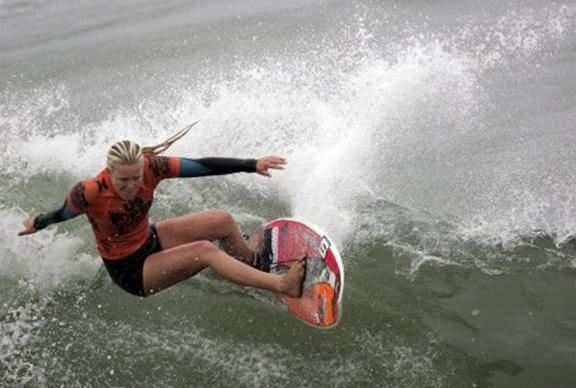 Sage Erickson out of ISA World Games due to ankle injury
America’s professional surfer Sage Erickson injured her ankle while cross training in Australia, which is likely to keep her out of action for a while.

The 21-year-old Californian surfer was due to compete in the International Surfing Association (ISA) World Games that is scheduled to go down at the Hainan Island in China from January 6 – 9. Due to the chilly weather in her home country, Erickson took a trip to Australia to practice for the upcoming event in warmer climate.

However, things did not exactly go according to plan and she ended up spraining her ankle over a decent size rock. According to the Ventura-based surfer, the ankle swelled up to twice its size within minutes, making it extremely difficult for her to walk.

The regular-footer is flying back to America to get a full diagnosis of her swollen ankle.

With the 2012 Women’s Association of Surfing Professionals (ASP) World Tour due to start in February, Erickson is hopeful to make a completely recovery before the season kicks off.

"I have just over a month to get this swollen little ankle in shape,” said Erickson. “Pulling out of China was a difficult choice, but knowing that my first event competing on my rookie year was around the corner, backed the choice to focus on my major priorities, which are the Women’s World Tour and Qualifying events. I’m very confident that I will be completely ready for the Roxy Pro. I’ve given myself a decent window to strengthen it and even make it stronger in this up and coming month at home.”

The young American surfer is making her debut in the women’ elite ASP tour this year and worked extremely hard throughout the previous year to finally make it among the ranks of world’s best female surfers. With the likes of reigning Women’s ASP World Champion Carissa Moore of Hawaii, former four-time Women’s ASP World Champion Stephanie Gilmore and her compatriot Sally Fitzgibbons in contention for the top honours, Erikson is hoping to enter the battlefield with 100 percent fitness in order to put on a strong fight and justify her inclusion to the 2012 Women’s elite tour line-up.

The first stop of 2012 Women’s ASP World Tour, Roxy Pro, will take place in Australia and run from February 25 – March 7.