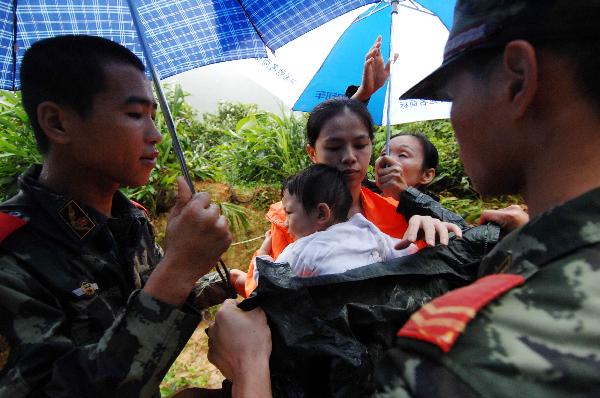 Rescuers help the stranded tourists transfer to safe place in Lingshui, south China’s Hainan Province, Oct. 4, 2010. All of the 125 tourists who were stranded by the landslide on Oct. 2 have been rescued and transfered to safe place by 3:00 pm, Oct. 4, 2010. (Xinhua/Hou Jiansen)
More than 100 tourists were evacuated from a tropical rainforest in the mountains of south China’s Hainan Province Monday afternoon, two days after they were stranded there by a rain-triggered landslide.

Altogether 125 tourists were stranded at a hotel on the side of Diaoluo Mountain in Lingshui County after a landslide hit Saturday afternoon making it impossible to get in and out of the area by road.

Most tourists were there with family members to visit the rainforests and celebrate the week-long holiday for China’s National Day that began on Oct. 1. The oldest of them, Tian Xiuyun from the provincial capital Haikou, is 80.

Rescue efforts were initially foiled Monday morning as the only way for rescuers and vehicles to enter the rainforest was blocked by mountain torrents.

However by 3 p.m., all the tourists had been evacuated to a farm run by the local forestry bureau. They would get a health check and rest before being transported by buses to major port cities including Haikou and Sanya, a county government spokesman said.

He said rescue work continued for a local farmer and a forestry worker who were reported missing Saturday.

Heavy rain has pounded Hainan Island for four days and the average precipitation has exceeded 200 mm in most parts of the province, the local weather bureau said Monday.

It said 15 of all 18 cities on the island were severely battered by a rainstorm, which was to last until Tuesday night.

The local maritime authority in Haikou issued a shipping ban Sunday on ferries and ships that could not withstand winds up to 74 km per hour.

As of Monday afternoon, more than 700 vehicles and 1,000 people were stranded at Xiuying Port in Haikou, waiting to take roll-on/roll-off ships to cross the Qiongzhou Strait, a five-hour journey. It is not known when ferry services will resume.

news.xinhuanet.com
Editorial Message
This site contains materials from other clearly stated media sources for the purpose of discussion stimulation and content enrichment among our members only.
whatsonsanya.com does not necessarily endorse their views or the accuracy of their content. For copyright infringement issues please contact editor@whatsonsanya.com